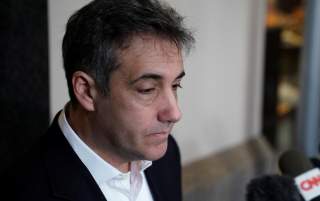 The founders of Fusion GPS said Tuesday they still consider the Steele dossier’s explosive allegations about former Trump lawyer Michael Cohen to be “unresolved” and “credible,” even though special counsel Robert Mueller’s report all but debunked them.

“Did Michael Cohen go to Prague? Where do we stand on that question?” ABC News producer Matthew Mosk asked Fusion co-founders Peter Fritsch and Glenn Simpson during an interview on Tuesday.

Mosk was referring to former British spy Christopher Steele’s claim that Cohen met with Kremlin operatives in Prague in August 2016 to discuss paying off Russian computer hackers. Cohen has vehemently denied ever visiting Prague, or of conspiring with Russians to hack and release Democrats’ emails. The special counsel’s report cited Cohen’s denials, and also found that there was no evidence that any Trump associates conspired with Russians in 2016.

Though the Cohen-Prague theory is widely considered to be debunked, Fritsch and Simpson say they consider it “unresolved.”

“I mean, it’s unresolved. If you look at the Mueller report, Mueller report reports what Michael Cohen told him,” Fritsch said. Asked if they are sticking by the Cohen-Prague allegation, Fritsch said that “we’re sticking by the credibility of Chris’s reporting” — a reference to Steele. “We believe it’s credible. Whether it’s true or not is another matter,” said Fritsch.

Simpson and Fritsch also dodged questions about the dossier’s inaccuracies during an interview on MSNBC’s “Morning Joe” on Tuesday.

“The dossier was an incredibly prescient document about what the Russians were doing,” NBC News reporter Ken Dilanian said on the show. “In terms of what it reported about what the Trump campaign was doing it seems like…it got some major things wrong,” said Dilanian.

Dilanian noted that the special counsel’s investigation debunked the dossier’s core allegation of a “well-developed conspiracy of coordination” between the Trump campaign and Russia. He also pointed to the dossier’s inaccurate claim that former Trump lawyer Michael Cohen visited Prague in August 2016 to meet with Russians.

“Do you think that Mueller simply couldn’t prove some of these things and that they actually may in fact be true? Or what are your thoughts about some of these allegations that haven’t proven out?” asked Dilanian.

Fritsch ducked the question. “I think the best metaphor for this is Pearl Harbor,” he said. “Here was a report, and we have to think about the meta theme of the report, which is that here was a report that said the Russians are trying to affect the outcome of an American election with the specific goal of electing Donald Trump president,” he added.

“That warning about an attack on Pearl Harbor turned out to be correct. In light of current events, I think no one can question of whether or not Donald Trump is capable of inciting a foreign government to help himself.”

Simpson asserted that few of the allegations in the dossier have been disproven.

“There isn’t a long list of things in the dossier that have been disproven. There are many things that have not been resolved as to whether or not they are true,” he said.