The Future of the Marine Corps Is a Stand-In Force 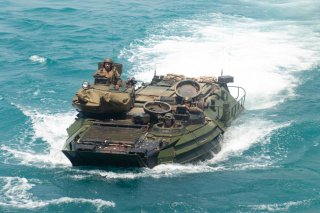 General David H. Berger, the United States’ top Marine, has guided the Corps through some of the most radical change it has experienced in a generation as the United States looks to the east and an increasingly assertive, belligerent China.

Gone are the long, grinding land warfare campaigns in the Middle East and COIN (counter-insurgency) operations. In its stead is a Marine Corps returning to its amphibious heritage, one foraged in the Pacific fighting the Japanese Empire during World War II.

This message was emphasized, again by Gen. Berger, in his message to the Marine Corps on their 246th anniversary.

In a recent paper published in Proceedings, a monthly magazine housed by the United States Naval Institute, Berger explains more concretely what the Corps’ transition and transformation mean for Marines, highlighting Stand-In-Forces.

“Small, lethal, low signature, and mobile, stand-in forces (SIF) are relatively simple to maintain and sustain, designed to operate across the competition continuum within a contested area as the leading edge of a maritime defense-in-depth” Gen. Berger explained.

“Depending on the situation, SIF may include elements from the Marine Corps, Navy, Coast Guard, special operations forces, interagency forces, and allies and partners. This last element is the most critical: every aspect of these deployments must be carried out in close partnership with host nations and partners.”

“The main ideas behind the SIF concept are deceptively simple. First, find a potential adversary’s people and things (such as weapon systems, sensor systems, submarines, etc.) in a given area, and then track them at a level that facilitates targeting by fleet or joint weapons until they leave that area,” Gen. Berger’s paper explains.

“Next, SIF must be hard for a potential adversary to find by maintaining a low signature, moving frequently and unpredictably, and using deception. If armed conflict begins, use knowledge of the adversary to help the fleet or other elements of the joint force attack quickly and effectively, blind the adversary, and deny him maritime areas to disrupt his plans and force him to move into other places where SIF and the fleet have an advantage,” Berger continues.

Gen. Berger’s vision draws deeply from Marine Corps history. Crises in the nation’s past forced the Corps to undergo rapid and sometimes drastic change—and today is no different.

“Marines enjoy a long history of developing concepts that were successfully turned into real warfighting advantages. Boldly entering places that foes wished to deny them, they have fought from inside contested areas. This is one of the primary reasons for which the nation has a Marine Corps. In the 21st century, there are contested areas that the nation needs to occupy before the shooting starts. A Concept for Stand-In Forces lights the beginning of the path to get there.”