Future of War Will Be ‘Hyperactive Battlefields’: U.S. Army General 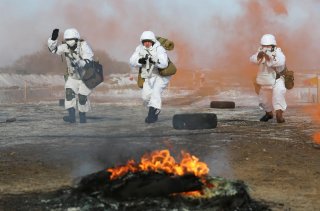 The Commanding General of Army Futures Command says warfare in 2035 will bring a “hyperactive battlefield,” dominated by a lightning-fast blitz of weapons, sensors, electronics, and explosives … all greatly empowered by AI.

When discussing AI, Gen. John Murray said that, in the short term at least, it will likely function primarily as a “decision aid” in a way that can pave the way forward into the kinds of high-speed warfare engagements he describes.

Fundamentally, what Murray seems to suggest, is that among many things, AI brings speed. New levels of pure speed when it comes to information gathering, data processing, analytics and informed decisions. AI will increasingly provide processed information at a pace beyond what can be imagined now.

“I think decisions will have to be made at such a pace that it's going to be incredibly difficult for a human decision-maker to keep up with it,” Murray said.

When it comes to procedural functions such as automated machine operations, calculating an otherwise disconnected set of variables or data specifics, computers can massively outpace human decision making, a phenomenon which may have inspired Murray to cite “automated target recognition” as an example of how AI continues to quickly change combat.

AI-enabled computers can gather new information and then bounce it off limitless volumes of catalogued data to draw comparisons, perform analytics, organize variables and make determinations... all in a matter of milliseconds.

“Automated target recognition brings the ability to acquire a combat vehicle and then help the operator...help the kid sitting behind the trigger and identify exactly what type of vehicle that is,” Murray said.

Thermal or electro-optical sensors could, for example, detect an enemy vehicle and then send the images into an AI-capable database of known information to immediately identify an enemy threat. Murray illustrated this point by recalling his days as a Commander of mechanized infantry when soldiers were trained to identify enemy vehicles by looking at flashcards with pictures. Soldiers would, for example, look at thirty flashcards to identify enemy vehicles, Murray explained.

“If after looking at 30 flashcards, a young soldier got 80 percent of them right, he was put in the gunner’s seat of a very lethal vehicle. The algorithms we trained out at Project Convergence were routinely getting 99 percent to 98 percent correct. So, in many ways, AI has the ability to make us safer,” Murray said.

This ground war automated target recognition system seems extremely significant as it can change the pace and effectiveness of armored warfare attack. Also, in an interesting way, it parallels a system quite similar to the F-35’s Mission Data Files, an intelligence database library of known threats specific to particular parts of the world to enable immediate recognition of specific enemy aircraft.