Future Wars Will Be Fought on the ‘Hyperactive Battlefield’ 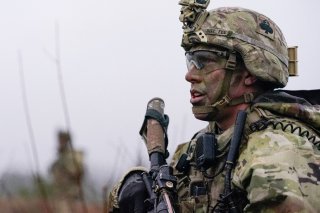 Precision weaponry, artificial intelligence-enabled data processing, electronic warfare, space-traveling hypersonic weapons, and borderless geographically unknown cyber-attacks continue to reshape modern war in ways that have not been anticipated, inspiring a massive Pentagon modernization push to include efforts to find the best and most impactful warfare innovations.

Future wars will likely be decided in the realm of “high-speed information-networking,” software upgrades that include artificial intelligence, long-range sensing, stealth, precision weapons and, perhaps most of all, sensor-to-shooter decision cycles. Army Futures Command Commander Gen. John Murray has often said that the future of warfare is expected to be what he called a “hyperactive battlefield.”

Part of the lens through which futurists view warfare decades from now also pertains to certain enduring principles which, despite technological change and the evolution of society, remain as timeless pillars of thought fundamental to winning wars. One of them is “mass.” Sheer size. Ultimately an enemy force will need to be contained, subdued, destroyed, or demoralized to the point of losing a will to fight. Large formations may indeed always be necessary to accomplish this.

Retired Maj. Gen. Michael McGuire, former chairman of the Board of the National Guard Association of the United States, and former Adjutant General for Arizona is quite familiar with the importance of  “mass-force” mobilization and expeditionary warfare, as he was largely responsible for the deployment of hundreds of thousands of Guardsmen during many years of war in Iraq and Afghanistan. He is of the clear view that, while technological advances such as artificial intelligence, cyber, electronic welfare, stealth airpower, and an entirely new arsenal of long-range, precision-guided and heavily networking weapons systems continue to massively transform modern war. There still is and may always be a critical need to “mass” force in order to ultimately prevail in war.

“I think Sun Tzu’s principle of ‘mass’ is still a critical part of what we do, right, you still need to be able to mass,” McGuire said in an interview. “I remember Gen. Milley. When he first came in, as the Chief of Staff of the Army, he talked about making sure we can grow back to a 1 million man Army and even get up to 1.2 million.”

Sure enough, a look at Sun Tzu’s famous and historical text, The Art of War, speaks directly to McGuire’s point, if in a different historical context. In one interesting portion of the book, Tzu cites nine key principles of war, which include “objective, offensive, mass, the economy of force, maneuver, unity of command, security, surprise, and simplicity.”

McGuire’s belief in the significance of force size is also reinforced by the current threat landscape. A quick look at Globalfirepower.com’s 2021 military force assessments report that China, for example, maintains an active force of 2.1 million soldiers, supported by an ability to flex to 3.3 million with reserves and paramilitary.  While the United States focuses heavily upon innovations that will help forces fight and prevail while “outnumbered,” a “mass” of numbers will also, quite likely, to a large extent be necessary to prevail in warfare, despite whatever measure of technological superiority there may or may not be.

McGuire reflected on the ancient text in the context of discussing his tenure with the National Guard, during which there was a virtually unprecedented mobilization of Guard forces who fought alongside their active-duty brethren with no distinction between the two whatsoever.

“We mobilized over 80% of the National Guard last year highest level of mobilization since World War Two, and we did not miss a single deployment of overseas titled 10 duty in Central Command in Pacific Command in Southern Command in European command when the combatant commanders call on that, we’re able to have others step up [and] fill the roles for those domestic missions and get those soldiers and airmen out the door,” McGuire said.

Mass mobilization, McGuire emphasized, is something that needs to be supported by proper resourcing including equipment, supplies, weapons and next-generation technologies. This interest in resourcing the warfighter is likely one of many reasons McGuire has recently announced his run for an Arizona Senate seat in the U.S. Congress.

“And all of us know that to get to that size Army, it’s going to actually require a rotation of forces from standing in an active component formation, and buying back three to one guard forces and formations,” McGuire said. “So, I think we can make it on the personnel side. And I think we can do it cost-effectively. The issue always becomes the equipment piece: how do we arm these formations? We just need to make sure that we build in requirements. It is about making sure that the requirements are laid in for Congress so they can look at how to appropriate money to meet these requirements.”

Interestingly, Sun Tzu’s text makes a specific reference to the crucial importance of resourcing the military, showing yet another alignment between the text from antiquity and McGuire’s thinking. While of course speaking about “swift chariots” and not tanks or helicopters, chapter two of Sun Tzu’s Art of War talks about the crucial and much-needed “expenditures” needed to move heavy chariots and equip “a hundred thousand mail-clad soldiers.”

“In the operations of war, where there are in the field a thousand swift chariots, as many heavy chariots, and a hundred thousand mail-clad soldiers, with provisions enough to carry them a thousand li, the expenditure at home and at the front, including entertainment of guests, small items such as glue and paint, and sums spent on chariots and armor, will reach the total of a thousand ounces of silver per day. Such is the cost of raising an army of 100,000 men.”

Perhaps Sun Tzu may be referenced in upcoming budget deliberations, something quite likely one might say should McGuire be elected to the U.S. Senate.