Gabbard: Here's Why I Punted the Impeachment Question 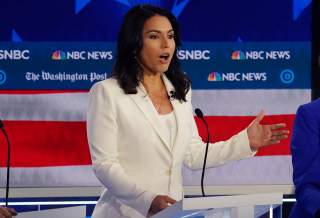 Gabbard was the sole Democrat to vote “present” on impeaching President Donald Trump, causing a stir among media and fellow lawmakers. She explained the decision Thursday on The Hill’s “Rising With Krystal Ball & Saagar Enjeti.”

--“My motivation is always coming from a deep love of country,” Gabbard said. “And that’s where, after doing my due diligence and going through the exhaustive report that was put out … I came to that conclusion that I could not, in good conscience, vote either ‘yes’ or ‘no.'”

The Hawaii congresswoman noted that the decision to remove the president from office “must be in the hands of voters.” She added that she believes “strongly” in her decision to vote present, telling co-hosts Ball and Enjeti she was “taking a stand for the center” as well as democracy.

Gabbard also quashed rumors that she plans to run as a third-party candidate. She called them “ridiculous” and “baseless,” suggesting that Americans “listen to what she’s saying.”

“Our country is torn apart. This impeachment process has only further divided an already divided country,” Gabbard said. “I’m running for president to try to bring people together, so that working side-by-side we can usher in a bright future.”

The congresswoman took a stand against Trump during Thursday’s interview as well, despite not voting for impeachment Wednesday evening. She said there is “no question” Trump is “unfit to serve as president.”

“I am running for president to defeat him for that reason,” Gabbard said before listing various things Trump has allegedly done wrong.