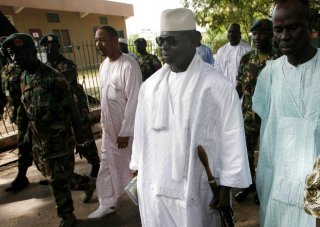 An independent report released by the Gambian Truth, Reconciliation, and Reparations Commission (TRRC) on Friday, December 24, has concluded that former Gambian dictator Yahya Jammeh should be tried for human rights abuses.

The report directly implicated Jammeh, accusing him of personal responsibility for a series of murders, incidents of torture, and rapes committed during his two decades as president of The Gambia, the small West African state surrounded on land by larger Senegal.

“Over a period of 22 years [...] Yahya Jammeh and [...] co-perpetrators committed very serious crimes against the people of The Gambia,” the report read–citing the twenty-two years of Jammeh’s rule, from his accession to power in a military coup in July 1994 to his downfall in early 2017. After losing an election to current president Adama Barrow in December 2016, Jammeh initially accepted the result, then changed his mind and forced Barrow to flee the country, leading to a military intervention from five neighboring nations which sent Jammeh into exile and allowed Barrow to accede to the presidency. Barrow comfortably won re-election in December 2021, in a contest that was certified as free and fair by the African Union and the European Union.

It is unclear what further steps the Gambian government will take to advance Jammeh’s case. The country’s Justice Minister, Dawda Jallow, indicated that the government was “committed to the implementation of the report,” but that it would carefully consider what to do next and would make a further announcement in May 2022.

The report noted the political difficulty of holding Jammeh’s trial within The Gambia, where the former leader remains popular in some areas. As alternative venues, it proposed holding a tribunal in Senegal, where former Chadian leader Hissene Habre was convicted of war crimes in 2017, or sending Jammeh to the International Criminal Court (ICC) in The Hague.

Since his 2017 exile, Jammeh has lived in Equatorial Guinea as a guest of that country’s leader, Teodoro Obiang, who has also been accused of widespread human rights abuses. It is unclear if Equatorial Guinea would extradite him if charges were pressed.

Jammeh has denied all wrongdoing and has remained active in Gambian politics during his exile, endorsing Barrow’s opponent and calling in to his political rallies during the 2021 election, to the president’s frustration.