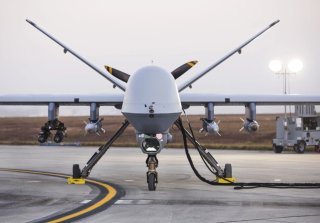 General Atomics, the aerospace company behind some of the United States’ most successful and unmanned aerial vehicle designs, explained that its next generation of unmanned drones will have a common core but radically different fuselages, allowing combat commanders to tailor drones to specific mission sets.

“Hostile stealth fighters are proliferating. New-generation integrated air defense systems are improving their ability to detect American and allied aircraft. Sophisticated adversaries want to push the joint force ever farther from contested territory and sharpen their ability to deny it if entered,” General Atomics explained in a statement.

“All this challenges the Air Force, its sibling services, and their international allies to find new and innovative ways to outfly the enemy. So, they’ve got to break with tradition,” the statement added.

The company added that “the symbol of the new era is the Collaborative Combat Aircraft (CCA), a bold new type of warplane that will reshape the way the Air Force and others do their work. And the most exciting new CCA is called Gambit, built by General Atomics Aeronautical Systems, Inc.”

The Gambit Core will account for about 70 percent of the price among the four drone models on offer and represents a single baseline for “landing gear, baseline avionics, chassis, and other essential functions.”

Gambit 1 is optimized for high-endurance missions, can fly with other drones or by itself, and acts as the eyes and ears of a strike group. In addition, it is optimized for patrol and can provide surveillance and early warnings to aircraft.

Gambit 2, while similar to its Gambit 1 sibling, adds an air-to-air capability. Though this negatively affects the Gambit 2’s endurance, it allows the drone to hold adversary aircraft at risk.

Gambit 3 is outwardly similar to Gambit 2, though it is optimized for a “complex adversary role,” and is capable of “learning from each engagement and adapting their tactics. This breed of Gambit offsets significant training costs by providing U.S. assets 5th-generation sensor technology without burning up F-35 and F-22 fleet hours.”

Lastly, Gambit 4 is a pure “combat reconnaissance-focused model” that lacks a tail assembly and is a flying wing design. This design choice minimizes the Gambit’s radar signature and helps to prevent detection by enemy radar.

Though General Atomics’ Gambit designs remain, for now, on the drawing board, they may be an economical option for the U.S. Air Force to quickly get a variety of unmanned aerial vehicles off the ground and into the air.

Caleb Larson is a multimedia journalist and defense writer with the National Interest. A graduate of UCLA, he also holds a Master of Public Policy and lives in Berlin. He covers the intersection of conflict, security, and technology, focusing on American foreign policy, European security, and German society for both print and radio. Follow him on Twitter @calebmlarson.
Image: DVIDS.