Game of Drones: What’s Next for the MQ-9 Reaper? 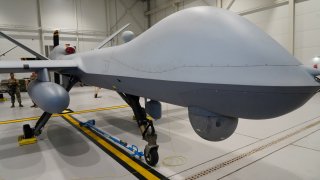 The Air Force is massively expanding the mission scope for its MQ-9 Reaper unmanned aircraft, integrating a host of new upgrades and adding weapons as part of a broader plan to fly the drone to 2035 and beyond.

The Reaper upgrades are multifaceted, according to an Air Force report, which says the primary aim is to transition the drone into multi-domain operations. The modifications include the integration of new infrared sensing technology and information assurance systems which may involve various kinds of hardening or data protection systems. Such an upgrade might further preclude the Reaper’s sensor feeds from being disrupted, jammed or hacked by an adversary or hostile force looking to derail drone missions. The technical specifics of how MQ-9 Reaper data networks are being hardened were not made available in the Air Force report, likely for security reasons, yet an ability to avoid being jammed could introduce a breakthrough level of functionality and mission reliability for the drone as it transitions from years of counterinsurgency into preparations for major great-power warfare in an environment where adversaries are armed with advanced air defenses and air platforms in a position to challenge an MQ-9 Reaper.

These threat circumstances may be one key reason why the Air Force has now armed the Reaper for the first time with an AIM-9X high-tech air-to-air strike missile. The AIM-9X, which F-35 pilots also use, relies on advanced-guidance technology to adjust to and destroy enemy targets.

On the F-35 stealth fighter jet, for example, the AIM-9X can operate in what is called “off-boresight” mode, meaning it can adjust course in-flight to attack a target to the side or behind the aircraft. Being fired “off-boresight” means the AIM-9X would not be limited to only attacking targets in a linear, straight-ahead trajectory. It is not clear if an AIM-9X can fire “off boresight” on an MQ-9 Reaper, yet it does give the drone a first-of-its-kind air-to-air attack possibility. This adaptation could be particularly impactful for the MQ-9 Reaper due to its increasingly long-range, high-resolution sensors which could position the drone to detect, and even potentially destroy, approaching enemy aircraft.

Interestingly, the Air Force report on the MQ-9 Reaper did say the unmanned aircraft is also getting weapons upgrades, an indication that newer weapons might be added to its already considerable weapons arsenal. The MQ-9 Reaper now fires the AIM-9X in addition to the AGM-114 Hellfire missile, a five-hundred-pound laser-guided weapon called the GBU-12 Paveway II, and GBU-38 Joint Direct Attack Munitions or JDAMs.

All of this, it is clear, is part of a deliberate Air Force effort to transition the combat-tested MQ-9 Reaper unmanned aircraft from years of counterterrorism and surveillance in an uncontested environment wherein it operated with air supremacy, into preparations for major high-threat warfare in scenarios where enemies will have fighter aircraft, advanced air defenses and its own armed drones potentially capable of air-to-air assault. Advanced enemies will also operate with sophisticated jamming technologies, electronic warfare and even cyber-attack technologies, all circumstances potentially explaining why the Air Force continues to put much effort into upgrading and sustaining its combat service life.

The MQ-9 Reaper has a long history of having successful upgrades to include the addition of extra new fuel tanks and a universal weapons interface designed to create the technical infrastructure and IP protocol standards sufficient to accommodate a growing range of weapons.

The Air Force report also made a point to emphasize multi-domain operations as key to the future of the MQ-9 Reaper, comments which could have been a reference to the newest MQ-9 Reaper variant, a sub-hunting maritime drone called the MQ-9B SeaGuardian. Equipped with sonobuoy dispensers, advanced data processing and specially tailored maritime environment submarine-hunting systems, the MQ-9B SeaGuardian is already operational and participating in large-scale Navy tests. The advent of MQ-9B SeaGuardian not only introduces new mission paradigms for the drone when it comes to adding a maritime domain configuration but also greatly contributes to the Air Force’s effort to transition the MQ-9 Reaper into a major warfare asset ready for highly-contested, high-risk warfare against technologically sophisticated enemies.