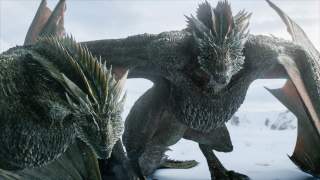 Key point: Today, U.S. military strategy is preoccupied with the similar threat posed by advanced surface-to-air missile systems such as Russia’s S-400, which can theoretically strike relatively larger targets from up to 250 miles away.

In addition to well-realized characters and shocking plot twists, one of the compelling aspects of The Game of Thrones series is that it situates itself in a rules-based fantasy world. Success or defeat are not determined by a character’s likeability or virtuousness, but arise from their ability to assess the treacherous material and social landscape around them.

Of course, twenty-first century military systems still differ from the mix of medieval and magical mayhem in Game of Thrones in many ways.

In the first Game of Thrones novel/season, exiled knight Jorah Mormont describes the military capabilities of the Dothraki, a culture of bow-using light cavalry-riding raiders inspired by Genghis Khan’s Mongol hordes. In Mormont’s assessment, the Dohthraki are entirely capable of out-shooting and panicking the conventional medieval-style armies of Westeros on an open battlefield. However, he doubts the nomadic horsemen have the siege-craft to capture a fortified city.

Arguably, a battalion of fifty-to-seventy ton main battle tanks share a surprising amount in common with light cavalry—they can advance rapidly into enemy territory and dominate nearly any other adversary over open ground. However, they often struggle to seize capture heavily defended cities and strongpoints in rugged terrain.

Furthermore, getting armored division to the battlefront poses a major challenges. Daenerys spends six seasons of Game of Thrones looking for a way to transport her Dothraki horde across the Narrow Sea. Armored divisions likewise often require trains and ships to bring them to the frontlines. Water obstacles—or even bridges with inadequate maximum weight tolerances—will stop tank divisions literally in their tracks.

Of course, modern mechanized division boast capabilities light cavalry lacked—reliable long-distance communication, air support from helicopters, and self-propelled guns and rockets like the M109 Paladin and M270 that can keep up with the tanks, and rain indirect fire on distant targets.

They also consume monstrous quantities of fuel, requiring tremendous logistical trains literally stretching out dozens of miles on a highway. By contrast, light cavalry liked the Mongols lived off the land—at the expense of the unfortunate local peoples they plundered.

For all the advances in modern armored vehicles, when the job is to either assault or defend a city or a fortified strongpoint, there’s no replacing the infantryman. Cavalry and armored vehicles both become extremely vulnerable to ambushes when advancing down narrow city street or rocky ravine. Though tanks can play an important supporting role, infantrymen continued to do the heavy lifting in urban battlefields like Mosul or Fallujah.

Game of Thrones’ Unsullied are presented as the ultimate infantry army thanks to their extreme discipline, extraordinary grit and close-combat fighting skills. Of course, modern infantry fight in dispersed squads, not close ranks, a trend that accelerated since the early nineteenth century.

Perhaps no modern fighting force emphasizes a tough, infantry-first fighting style as much as the U.S. Marine Corps, which requires even its jet fighter pilots to train first as riflemen. Furthermore,on battlefields areas where there is abundant cover—cities, mountains, forests—they can threaten adversaries with long-range snipers, machine guns, and portable tank-busting missiles. Furthermore, just as the Unsullied are well protected with breastplates and shields, modern infantry benefit from an extraordinary degree of armor protection, dramatically decreasing fatalities to abdominal wounds.

Wildfire is shown being used in a manner reminiscent of small tactical nuclear weapons designed for use on battlefield targets. For example, in a Storm of Swords Tyrion detonates a huge wildfire naval mine that destroys a large number of ships attacking the capital of King’s Landing. The devastation brings to mind U.S. nuclear weapons test on the Bikini atoll which demonstrated the horrifying effects of a nuclear blast on ships at sea. Throughout the Cold War, U.S. and Soviet submarines and ships carried numerous nuclear anti-ship weapons.

In the fifth season of Game of Thrones, Cersei uses another wild fire “mine” to annihilate her political and religious opponents. This reflects concept of using tactical nuclear weapons in a “decapitation strike” designed to wipe out enemy leadership, paralyzing their response.

Wildfire has one enormous limitation, however—the Lannisters lack a reliable delivery system to employ it in battle. This is a common problem: it’s one thing to develop a nuclear munition or, say, nerve gas. It’s an altogether different challenge to have the means to deliver it to a distant target.

However, one or two players in the Game of Thrones have found such a delivery system.

The game-changing nature of Daenery’s flame-spitting dragons has inspired many commentators to compare their impact on Westeros’s battlefields to nuclear weapons. However, as pointed out in this entertaining discussion on Vox.com, this comparison is overstated as the dragons are primarily used for battlefield rather than city-destroying strategic attacks, and are also not strictly unstoppable on the battlefield if confronted by enough ranged firepower.

As dragon fire is described as having melted Harrenhal castle, though, there is the implication it could be used as devastating strategic weapons along the lines of Allied firebombing in World War II.

The dragon’s true battlefield power comes from their flying mobility, which allows them to strike where the enemy is vulnerable, and disengage from situations where they are at risk. Furthermore, they give Daenerys an unmatched surveillance capabilities and rapid communication links with her allies—thus enabling her operational gambits far more effectively.

This same concept underlies modern stealth fighters like the F-35 Lightning: their power is not so much that they are undetectable and indestructible; after all, there are methods such as low-band-width radars and infrared-guided weapons and sensors that pose a genuine threat.

Rather, they are capable of survey battlefields better than their adversaries and picking when and where they engage enemies using long-range weapons while staying out of range of retaliatory fire. Furthermore, they are effective surveillance platforms that can network what their sensors and communications with friendly forces, enhancing their effectiveness.

Of course, one way to counter a highly mobile enemy like a dragon is another dragon. However, ground-based air defenses, though more reactive, might offer a more economical option.

At the end of season six of Game of Thrones, Daenerys deploys her dragons against a horde of undead wights—but fails to reckon with the anti-air capabilities of their leader, the Night King.

His magically-guided spear inflicts catastrophic 33 percent casualties to Daenery’s air force. Today, U.S. military strategy is preoccupied with the similar threat posed by advanced surface-to-air missile systems such as Russia’s S-400, which can theoretically strike relatively larger targets from up to 250 miles away, though its effective range versus smaller, agile fighters is far shorter.

Daenerys will need to develop her own Suppression of Enemy Air Defense strategy for future encounters. Modern U.S. tactics focuses on using a combination of jamming, stealth aircraft and standoff range weaponry to degrade and pickoff the radars such batteries rely upon.

Fortunately, we still haven’t found ways to raise armies of the walking dead—an operational ploy which also played a major role repelling invaders from Gondor in the Lord of the Rings. We can be thankful some aspects of Game of Thrones remain strictly fantastical, even in our conflict-prone world.