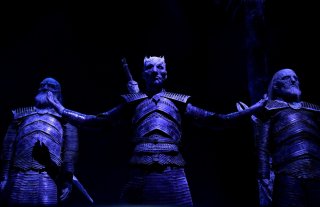 With HBO and HBO Max getting ready to debut the new House of the Dragon series later this month, HBO has announced that the original Game of Thrones series is now available on 4K Ultra HD, HDR 10, Dolby Vision, and Dolby Atmos.

“From epic battles like Blackwater and The Battle of the Bastards, to emotional scenes like Hold the Door, and the shocking twists of The Red Wedding and The Great Sept Explosion, fans will be immersed in the world of Westeros in ways they haven’t seen before,” HBO announced in their release. “Whether subscribers are watching the series for the first time or in anticipation of the premiere of “House of the Dragon,” these formats make the episodes look sharper and showcase deeper, richer colors, while boasting atmospheric audio.” HBO Max now offers a “World of Westeros” section, with all Game of Thrones-related content.

Meanwhile, HBO Max announced last week will host a podcast about the new House of the Dragon series, hosted by Jason Concepcion and Greta Johnsen. Concepcion is a noted Game of Thrones expert who announced the “Ask the Maester” column for Grantland, and later for The Ringer.

“Our goal is to create a space where all fans—whether they’ve been watching for 10 years or 10 weeks—can truly immerse themselves in all things ‘Game of Thrones’ and maybe even learn something new from the folks who brought it to life,” Concepcion said in HBO’s statement.

Meanwhile, viewers have begun to offer their first reactions to the series. “For those curious about the series, without spoilers, I can say that the thing I really dig is the fact that it still feels epic in scale and scope while telling a personal and intimate story about one family, showcasing both their love and dysfunction,” Christina Radish of Collider wrote on Twitter. Brandon Katz wrote that the first episode of the show “very efficiently explains its context in relation to GoT, introduces its core characters, and lays out the central conflict of the series. It's an easy-to-follow premiere with vibrant colors and detailed texture.”

Meanwhile, the Daily Mail warned that the new series offers "barely any sex and nudity,” while also noting the inclusion of “Non-binary stars” and “gender-fluid characters.”

“From the very first episodes of George R. R. Martin’s eight-season epic there were graphic sex scenes, stories of rape and incest and even gory depictions of child murder,” the Mail said. “But 11 years later, times have changed—even in the fantasy land of Westeros. For House Of The Dragon, the hotly anticipated prequel to the original series, has gone fully woke, according to Hollywood insiders.”