General: A War With China May ‘End Badly’ 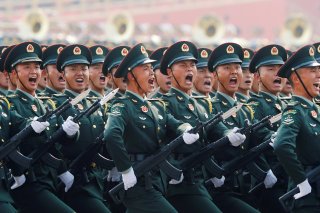 As tensions continue to ramp higher between the United States and China, some experts are now predicting that America would lose a potential war with the Asian nation if the U.S. Air Force does not become more modernized and regain its air dominance in the region.

“We have to focus our fighter force to the basic realities of a new threat environment,” Air Combat Command’s Gen. Mark D. Kelly said during his speech at the AFA’s Air, Space & Cyber conference last month.

“And that requires the fighter force to change to be successful,” he continued, adding that the joint force “requires air superiority.”

According to the “four-plus-one” concept for the future fighter force, per Air Force Magazine, Kelly was looking forward to an improved F-22 Raptor, making the F-35 fighter jet as the “cornerstone” of the fleet, relying on the F-15E Strike Eagle and F-15EX Eagle II as “big weapon” carriers with F-16 Fighting Falcons providing additional capacity, and utilizing the A-10 as the “plus one.”

Kelly mentioned that the Air Force is fast becoming mired in the “irrelevance” category because it is not taking quick action to retire legacy systems. He also called China the “apex peer adversary” that possesses improved skills in electromagnetic spectrum operations.

China’s systems are “designed to inflict more casualties in the first thirty hours of combat than we’ve endured over the last thirty years in the Middle East,” he warned, adding that “it will not end well” if China is able to possess sixth-generation capabilities before the United States.

“Air superiority is a terrible place to receive a silver medal,” Kelly noted.

Daniel Davis, a former lieutenant colonel with the U.S. Army, recently noted in a recent op-ed published by the Guardian, sounded even more pessimistic as an all-out war with China could potentially see a “nuclear exchange.”

“Before war comes to the Indo-Pacific and Washington faces pressure to fight a potentially existential war, American policymakers must face the cold, hard reality that fighting China over Taiwan risks an almost-certain military defeat—and gambles we won’t stumble into a nuclear war,” he writes.

“Bluntly put, America should refuse to be drawn into a no-win war with Beijing. . . . The most likely outcome would be a conventional defeat of our forces . . . at the cost of large numbers of our jets being shot down, ships being sunk, and thousands of our service personnel killed,” Davis said in his op-ed. “But the worst case is a conventional war spirals out of control and escalates into a nuclear exchange.”