General Dynamics’ New StrykerX Will Blow Away the Competition 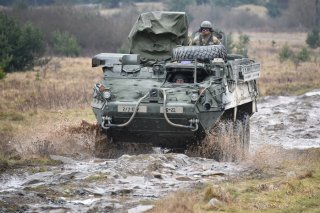 But GDLS is working to change this perception and highlight the firm’s long-standing research, engineering, and innovation efforts. While GDLS is known for producing combat-tested platforms such as the Abrams battle tank and Stryker fighting vehicle, the firm has spent years working to identify and integrate new paradigm-changing technologies. This has been evidenced over the years through the massive upgrades to both the Abrams and Stryker. The current variants of these vehicles have been so thoroughly revamped that they are almost entirely new platforms when compared to their original models.

“The Abrams tank has been around for a long time. The Stryker has been around for half as long but still a long time. Those are the two things we’re known for most. But we’re, we’re an Air Defense System provider. Now, we’re a ground vehicle robotic provider, and we have figured out a way to use artificial intelligence and ground combat vehicles together. And those are innovations that don’t get as much connection to our company name as we would like them to get,” Keith Barclay, Director of U.S. Strategy and Growth, General Dynamics Land Systems, told The National Interest in an interview.

GDLS will be unveiling new “demonstrator” StrykerX and AbramsX platforms at the 2022 Association of the United States Army, Annual Symposium.

“These are actual full-up vehicles. These are not mock-ups, or models, or that kind of thing. These are real vehicles. They’re all tech demonstrators, as we call them. And the intention collectively is for us to be able to show our customers, primarily the Army, but others, the latest of our technological innovation, and the innovation that we have brought on to combat vehicles from our partners across the defense industry. We’re targeting these in pursuit of what we think anyway are the Army’s modernization and battlefield strategies and requirements in the near term,” Barclay said.

Each of the “X” variants of these platforms contains unprecedented levels of high-tech innovation in propulsion, manned-unmanned teaming, targeting, command and control, sensing, and weapons.

“Unlike a prototype vehicle, or a bid sample, or something that’s built for a particular competition or program of record, these are tech demonstrators, they are built for us to do just what the name says, just to demonstrate a bunch of technologies that we think are ready today are very near to being ready today,” Barclay said.

For instance, GDLS has integrated new weapons, computing, fire control, and sensing into its Stryker vehicle through its Short Range Air Defense program in which the vehicle fires Stinger, javelin, and Hellfire missiles to counter drones, helicopters, and other enemy air attacks. This upgrade incorporates a number of new air defense innovations. GDLS has also long been immersed in developing and advancing robotic systems as well. Additional developments pursued by GDLS in close coordination with the Army include breakthroughs in autonomy, vehicle-launched drones, and multi-domain manned, unmanned teaming.