The Geneva Summit and Next Steps for Nuclear Negotiations 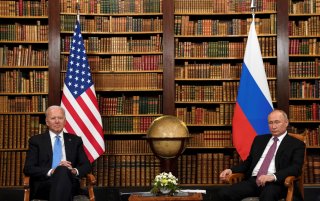 In November 1985, the quiet city of Geneva, Switzerland, played host to a brief but significant moment in the history of nuclear arms control and international diplomacy. At a bespoke villa not far from the city center, newly elected general secretary of the USSR Mikhail Gorbachev and President Ronald Reagan would meet, for the very first time, to discuss the future of the U.S.-Soviet relationship.

Though it produced no major agreements, the Geneva Summit would mark the beginnings of both a productive friendship between the two leaders and a path for steady diplomacy between the two superpowers. Their joint statement, released shortly after the summit, established the two nations’ bold commitment to reducing nuclear risk: “a nuclear war cannot be won and must never be fought.”

Last month, President Vladimir Putin and President Joe Biden reaffirmed this statement following their own summit in Geneva, echoing both in symbol and in substance their predecessors’ aims to establish a framework for stability in the bilateral relationship of their two nations.

“When Reagan and Gorbachev made that statement in 1985, that was still at the height of the Cold War,” Lynn Rusten, the vice president of the Global Nuclear Threat Program at the Nuclear Threat Initiative, said. “[The statement] was foundational for work that then proceeded – negotiations on the original START Treaty, on negotiating the INF Treaty – sending signals to their respective governments that we were going to manage our nuclear risks jointly and try to reduce them.”

Speaking recently on Press the Button, Rusten shared her views on the outcomes of the Geneva Summit and what actionable steps the United States, Russia, and China can take towards future arms control efforts.

“This idea that diplomacy is a reward for good behavior as opposed as a tool that you use with competitors and adversaries, as well as friends, really needs to be dispelled,” Rusten told host Tom Collina.

The summit’s outcome – a joint commitment to a Strategic Security Dialogue, has the potential to reestablish the diplomatic guardrails within a bilateral relationship strained in recent years by conflicting geopolitical interests, allegations of election interference, and the Trump administration’s exit from several major arms control agreements.

“Not only have they committed to have their governments undertake this [strategic security] dialogue, but they signaled that they wanted it to be results-oriented – that it should be aimed at both arms control measures and other nuclear risk reduction methods,” Rusten said. “And that is really important.”

The strategic security dialogue aims to develop a channel of communication between the two parties, a venue to exchange views and perceptions, and, crucially, to ask questions of one another that may assuage any security concerns: Why has Russia developed so many novel strategic systems? Why does the United States keep building up missile defense capabilities? Why does Russia have so many non-strategic nuclear weapons?

“Those questions are important because the security concerns on both sides are driving each country to undertake steps for its security that end up undermining the security of the other country,” Rusten said. “So you end up in this arms race dynamic where each side is doing things that is undermining mutual security. We want to reverse that trend.”

Despite the promising developments in Geneva, Rusten argued that the ultimate test of these negotiations lies in what comes next. “It is essential that [the Strategic Security Dialogue] go beyond that initial exchanging of views and grievances about what each side is doing, to the practical: where can we find overlapping mutual interests to get to the next agreement?”

The entire interview with Lynn Rusten is available here on Press the Button.