George Papadopoulos Is Running For Congress 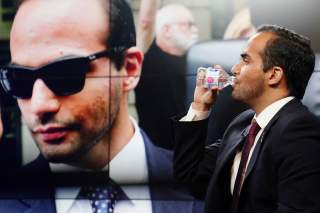 Papadopoulos spent 12 days in prison in 2018 after being convicted of lying to investigators about his contact with Russians during the 2016 campaign. He filed for a House run at the end of October and officially launched his bid Monday for the California House seat.

“When I go and talk around the districts, the state, the country, they tell me we need a candidate to represent the community that has an ‘America First’ agenda at heart that supports the president,” Papadopoulos, a Republican, said.

The 32-year-old added that he will be looking to “enact legislation that has real-life consequences for the American people and my constituents.”

“I’m speaking to you from Los Angeles today,” Papadopoulos continued. “And this is a state with tremendous potential. Unfortunately, the governing apparatus and the party in this state has driven it right into the ground.”

The Democrat has called the allegations a “smear campaign” led by her “abusive” husband, whom she is in the midst of a divorce from.