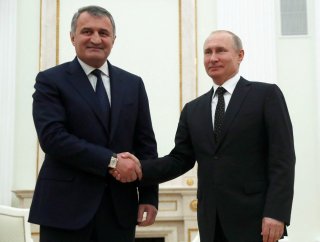 Alan Gagloyev, the newly elected president of Georgia’s secessionist South Ossetia region, indicated on Monday that the country had temporarily abandoned its plans to hold a referendum on whether or not to request annexation by Russia. Despite this, his office indicated a referendum would still be held in the future, depending on local conditions and the outcomes of talks with the Kremlin.

The proposed referendum, which was scheduled for later this month was initiated by Gagloyev’s predecessor, Anatoly Bibilov. Gagloyev previously described the referendum as a political stunt intended to secure Bibilov’s re-election bid. During the campaign, Gagloyev emphasized repeatedly that most South Ossetians supported eventual entry into Russia, but accused Bibilov of “dragging our Russian colleagues into this situation … discrediting the Russian Federation and causing anti-Russian sentiments in the republic,” according to Russia’s state-run TASS news agency.

Although Gagloyev has voiced support for the eventual accession of South Ossetia into Russia, he has supported a slower path to annexation, including consultations with Moscow on how the region would be integrated. He emphasized that South Ossetia could not unilaterally vote to join Russia without Moscow’s consent, but asserted that “as soon as our strategic partner, Russia, gives a signal … the people of South Ossetia are ready to help the Russian Federation and if necessary take a step forward.”

Gagloyev also warned that “the current authorities of Russia … are still busy with other issues,” an apparent reference to Russia’s ongoing war in Ukraine. As a result, he acknowledged that consultations on South Ossetian entry into Russia might be delayed, as the war in Ukraine was “more serious” for the Kremlin than the annexation.

South Ossetia, whose independence is recognized only by Russia, was considered an autonomous oblast, or administrative division, within the nominally independent “Georgia Soviet Socialist Republic,” prior to the Soviet Union’s collapse. Following the Soviet Union’s dissolution, the region attempted to secede from the new country of Georgia; by 1992, it became a de facto independent state, although it remains heavily dependent on Russia for political and economic assistance.

After clashes between Georgian and South Ossetian forces in early 2008, Russia launched a week-long invasion of Georgia. Although it withdrew from the rest of the country by the end of 2008, Moscow has continued to station peacekeeping troops within South Ossetia and Abkhazia, a second secessionist region in northwestern Georgia.