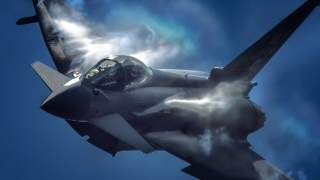 The German air force just received the last Eurofighter Typhoon fighter from its initial order for 143 of the planes.

But many more new Typhoons could be in the air arm’s future as it eyes replacements for older planes.

The German air force in late 2019 operates 141 surviving Typhoons plus 74 Tornado fighter-bombers and 30 Tornado ECRs, the latter equipped with special weapons and sensors for the dangerous suppression-of-enemy-air-defenses, or SEAD, mission.

The 1980s-vintage Tornados need replacing. Versions of the Typhoon could fit the bill. And new Typhoons might also replace some of the older Typhoons in German service. If Berlin orders new Typhoons for all possible requirements, the German air force in a decade or so could operate more than 250 Typhoons.

Jane’s was the first to report the German air force’s intention to swap old Typhoons for new ones. “Speaking at the company's Manching facility near Munich, Kurt Rossner, Head of Air Combat, said that Airbus DS is close to signing a contract with Berlin to replace the Luftwaffe's 38 Tranche 1 Eurofighters under a program to be called ‘Project Quadriga,’” Jane’s reported in early November 2019.

“These early aircraft would then be sold to the international market before being replaced in Luftwaffe service by new-build Tranche 3 platforms that will include the E-Scan Mk. 1 active electronically scanned array radar and updated software.” Jane’s cited Switzerland as one possible buyer of the old German Typhoons.

Meanwhile, the German air force is close to making a decision on a replacement type for its fleet of Tornado fighter-bombers. The air force plans to replace all 85 of the Tornados with a new fighter starting in the 2020s. Just two designs are in the running for the multi-billion-dollar acquisition: the Typhoon and the F/A-18E/F Super Hornet from American plane-maker Boeing.

Defense News for one predicted Germany would favor the Typhoon. “The main argument is to keep European companies involved in building combat aircraft and, perhaps even more importantly, staying clear of disturbing Franco-German momentum in armaments cooperation.”

But one factor complicates Berlin’s decision. Germany has an obligation under NATO to provide fighters to the alliance’s nuclear mission. The Super Hornet is already certified to carry nuclear bombs. The Typhoon isn’t certified for the nuke mission.

Germany’s Tornado ECRs are as old as the Tornado fighter-bombers are and also need replacing. No formal program exists for a new German SEAD plane, but considering that the German air force and the U.S. Navy possess the only large dedicated SEAD forces in NATO, there’s a strong incentive for Berlin to preserve the capability.

Anticipating the requirement, Airbus in early November 2019 offered Germany a version of the Typhoon equipped for SEAD. The defense-suppression Typhoon would be a new variant of the twin-engine plane and would require extensive modification of the basic Typhoon design.

Notably, Boeing already builds a SEAD version of the Super Hornet called the EA-18G Growler. The company reportedly is seeking permission from the U.S. State Department to export the Growler to Germany, presumably hoping to add Growlers to a potential German order for Super Hornets.