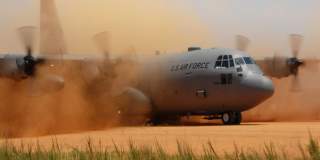 A German parliamentary source has told Reuters that the budget committee of the lower house of parliament has approved the purchase of six C-130 airlifters.

The package includes the procurement of spare parts, maintenance of the aircraft in the first three years and the initial training of technical and aviation personnel.

The C-130 Hercules cargo aircraft will be stationed in Evreux in Normandy where France already operates the same type of aircraft.

(This article by Dario Leone originally appeared on The Aviation Geek Club in 2018.)

Plans are also underway to upgrade the radar of the Eurofighter, upgrade Puma armored personnel carriers, sign a maintenance contract for NH90 helicopters and to procure telecommunication facilities for frigates and new uniforms and protective equipment.

Germany sharply curtailed military spending after the end of the Cold War, but began boosting spending again after Russia’s annexation of the Crimea region of Ukraine in 2014.

Germany’s armed forces are due to get seven rescue helicopters too.

Furthermore as we have previously reported, the Luftwaffe (German Air Force) has a requirement to field a replacement for its fleet of 90 Tornado IDS (Interdiction Strike) and ECR aircraft starting from 2025 to enable a smooth transition into the retirement of the Tornado in about 2030. The German government stated that its preferred choice is to procure additional Eurofighter Typhoons, but the Super Hornet is on the list of preferred alternatives along with Boeing’s F-15 Advanced Eagle and Lockheed Martin’s F-35 Lightning II Joint Strike Fighter (JSF).