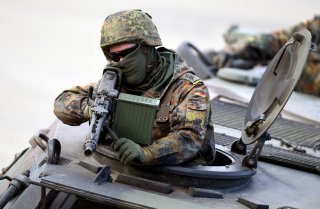 On the official YouTube channel for the Bundeswehr—Germany’s Armed Forces—the upgraded Leopard 2A7V main battle tank (MBT) has undergone its first round of tests. In the video, which was released last month and has been seen more than 430,000 times, the tank underwent the tests at the Technical Center of the German military located in Meppen.

The Leopard 2A7V is a modernized version of the Leopard 2A6, already considered one of the best MBTs in the world. Introduced in 2001, the 2A6 version has been seen to even outperform the American M1A2 Abrams, British Challenger 2 and French Leclerc in terms of protection, firepower and mobility. The Leopard 2A6 has been adopted by the militaries of not only Germany, but also Canada, Finland, Greece, Portugal and Spain.

The 2A6 has been considered one of the most “traditional” upgrades and built upon the 2A5 upgrade—which introduced major changes to the turret design, including giving the MBT its distinctive “Wedge” turret.

This most recent modernization of the German armored platform was first revealed nearly a decade ago—and the tank was developed by German Krauss-Maffei Wegmann in cooperation with the Bundeswehr. It was reportedly designed to address modern tank warfare including low-intensity conflicts but also urban warfare and conventional military operations. The German military had announced plans to upgrade about 50-150 Leopard 2s to the M2A7 standard.

The tank, which is similar in design to the 2A6 variant, has maintained a crew of four including the driver located at the front-right of the hull, while the commander and gunner are on the right side of the turret with the loader to their left. The engine compartment is located at the rear of the hull, and it is separated from the crew’s fighting compartment by a fireproof bulkhead.

The sixty-ton MBT is powered by an MTU Mb 873 ka 501, turbocharged diesel engine that can produce upwards of fifteen hundred horsepower. The Leopard 2 M2A7 has a maximum road speed of sixty-eight kilometers per hour (approximately forty-two miles per hour), and a maximum range of 550 kilometers (approximately 341 miles).

This MBT’s main armament is a Rheinmetall 120-millimeter L/55 smoothbore tank gun that is able to fire the latest Rheinmetall 120mm DM53 Armor-Piercing Fin-Stabilized Discarding Sabot—Tracer (APFSDS-T) ammunition, and it can use a depleted uranium penetrator. With this, the tank has an additional combat range of 1,600 meters and much better armor penetration characteristics than other current MBTs.

The Leopard 2A7V’s secondary armament includes a Rheinmetall MG3 7.62 millimeter machine gun mounted coaxially to the left of the main gun. An additional 7.62-millimeter machine gun can be mounted to the loader’s hatch. The tank also has improved hull mine protection, with upper glacis added modular armor and third-generation Attica thermal imaging units in both the commander’s independent sight as well as the gunner’s sight.

The Bundeswehr isn’t the only operator of the newest Leopard 2 variant. The tank has entered service with Denmark, and Germany’s northern neighbor is on track to receive a total of forty-four of the newest variants by 2022.

The German military is expected to have 104 of the tanks in service by 2023, and the first serially retrofitted 2A7Vs should be delivered to the Bundeswehr next year.