The German Wiesel Is a Cute Mini-Tank 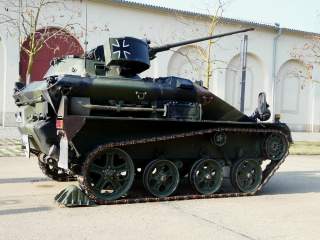 In 1972, the German military embarked on a program to replace its lightweight and air-dropped Kraka quadbikes used to move paratroopers after they hit the ground.

The result of this effort was the Wiesel, a cute, unusual tracked armored vehicle and a modern equivalent of the tankette, a type of tank which largely went out of fashion during World War II.

While the Wiesel still seems out of time, its design remained relevant and useful and the Bundeswehr had most recently deployed them to Afghanistan with its small troop contingent.

(This article by Robert Beckhusen originally appeared at War is Boring in 2017.)

The German army first began receiving Wiesels in the late 1980s and retains at least 176 of them as of 2016. Sixty-four carry wire-guided TOW missiles, 87 pack 20-millimeter guns and another 16 are for reconnaissance duties. A final nine Wiesels are engineering vehicles, according to the International Institute for Strategic Studies.

OK — the Wiesel is not a tank.

The vehicle’s thin, steel armor won’t absorb much damage beyond rifles and light machine guns. But it can travel at a brisk 43 miles per hour, has a low profile and is much cooler — we’re referring to temperature here — than a tank, making it harder to spot with thermal imaging sensors.

The Wiesel 2 is a bit different from the first Wiesel, is a bit bigger with more armor and has a bigger engine among other features — and comes in ambulance, command, mortar and air-defense variants.

But both versions provide a valuable function by giving paratroopers and airmobile infantry a speedy and punchy ground vehicle, as the Wiesel is small and light enough to travel inside — or come slung underneath — a CH-53 Sea Stallion helicopter. While Germany envisioned the Wiesel as being dropped via parachute, several early failed experiments ended this as a viable option.

The Wiesel also has low ground pressure, allowing it to travel over terrain where tanks cannot go. Thus, a group of Wiesels can make excellent little ambushers with their TOW missiles, which can match a tank’s main cannon in terms of range. Day-and-night sights further enhance the Wiesel’s versatility.

As the Syrian Civil War has made alarmingly clear, TOWs and other similar anti-tank missiles can devastate modern tanks without active-protection systems — and even those cannot make a tank invulnerable to missiles.

The Wiesel might also be more than just a throwback but ahead of its time. The Bundeswehr converted a Wiesel into a robotic mine detector with a ground-penetrating radar, and the U.S. military bought seven Wiesels for testing unmanned ground vehicles.

More importantly, the United States has been thinking hard about the roles and relevancy of airborne infantry in the 21st century. A cheap, shoulder-fired missile can down a plane with dozens of paratroopers inside, pushing future drop zones farther away from an objective and leading to a much longer hike for slow-moving leg infantry.

Giving paratroopers wheels is one impetus behind the U.S. Army’s Combat Vehicle Modernization Strategy, which aims to develop a series of air-deployable armored vehicles with weapons extending to medium and large caliber cannons. There’s a conceptual look at this strategy in this December 2016 video from the Army’s Training and Doctrine Command.

Watch. And notice that it’s an implicit admission that airmobile troops don’t have the mobility — on the ground — and the firepower to meet today’s threats.

“The infantry [brigade combat team] lacks a lightweight combat vehicle that provides mobile protected firepower to enable freedom of movement and freedom of action, which are essential to expanding a lodgment and preventing enemy counterattack,” a September 2015 Army strategy paper explained.

The Stryker and Bradley are both too heavy to carry from a helicopter, but they could reinforce an airborne unit with lighter armored vehicles. This would still require the heavier vehicles to come into a war zone from sea or pre-positioned land bases.

One possibility is a future Army mini-tank or fighting vehicle similar to the British Scimitar and Scorpion families of light armored vehicles. The Germans were influenced by these vehicles when they designed the Wiesel.

If you wanted to shed more weight, make the future vehicle robotic. And maybe take a cue from the speedy, miniature Wiesel.