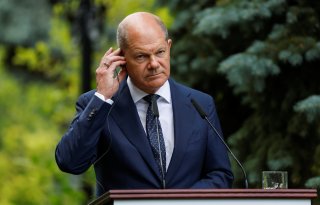 Scholz said his Russian counterpart should "come to a diplomatic solution as quickly as possible, based on a ceasefire, a complete withdrawal of Russian forces and respect for the territorial integrity and sovereignty of the Ukraine," according to his spokesman, Steffen Hebestreit. "The Federal Chancellor emphasized that any further Russian annexation steps would not go unanswered and would not be recognized under any circumstances," Hebestreit added.

Scholz encouraged Putin "not to discredit and continue to fully implement" a grain deal—negotiated between Russia, Ukraine, Turkey, and the United Nations earlier this summer—guaranteeing unimpeded grain exports out of Ukraine’s Black Sea ports. The call touched on the security of the Zaporizhzhia nuclear power plant, with Scholz asking Putin to "avoid any escalation and implement in full the measures recommended by the International Atomic Energy Agency.” IAEA chief Rafael Grossi said last week that talks are underway to establish a “protection zone” around the plant, adding that both Moscow and Kyiv have shown interest in the proposal.

Despite the apparent lack of any substantive agreement between the two leaders, Scholz stressed the necessity of maintaining contact with the Kremlin. "It is right to speak with each other and to say what there is to say on this subject," he said. Scholz said German weapons played a “decisive” role in Ukraine’s recent battlefield successes. German military aid to Ukraine has included twenty-four Gepard anti-aircraft self-propelled guns, ten Panzerhaubitze 155 mm howitzers, and a wide range of lighter equipment, including 21.8 million rounds of small arms ammunition.

“Sadly, I cannot tell you that the impression has grown that it was a mistake to begin this war,” Scholz said in a press briefing, adding that Putin has “unfortunately” not changed his stance on the ongoing conflict in Ukraine.

The Kremlin has so far not signaled any willingness to shift course, instead doubling down on the Russian war effort as the Ukraine invasion enters its seventh month. “The special military operation is underway and will continue until the goals that have been set are achieved,” Kremlin spokesman Dmitry Peskov said last week following the retreat of Russian forces from the northeastern Kharkiv region.

“All our action has been aimed at helping people living in the Donbas. It’s our duty, and we will fulfill it until the end,” Putin claimed earlier this month at the Eastern Economic Forum in Vladivostok. "I’m sure we haven't lost anything and we won't lose anything. The main gain is the strengthening of our sovereignty. It’s an inevitable result of what’s going on.”