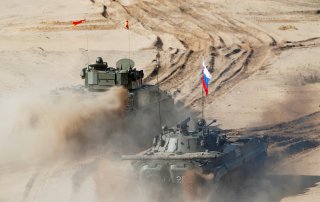 The Leopard 2 represents what is currently the pinnacle of German tank design and is considered one of the most capable European tanks currently in production. It is in service not just with the German Bundeswehr but also with a dozen other European countries, and even including some non-Europeans and non-NATO members like Chile, Indonesia, and Singapore.

Though the IDF announced the deal on social media just recently, its announcement comes on the heels of an earlier German Ministry of Defense press release announcing a German parliamentary decision to earmark funds for procuring the Rafael Trophy active protection system. But what is the Trophy system?

It won’t be as simple as just bolting on the system and driving off though, seemingly extensive modifications would be needed to mate the Israeli active protection system to the German tanks.

The German Ministry of Defense outlined what would be needed to make the Trophy system a success, stating that “The protection system will also be fitted on a test vehicle for developmental support. To this end, the hulls of the vehicles will have to be replaced in order to integrate the additional power supply required.” Spares and training would be needed as well. “In addition, the necessary spare parts, ammunition and also transport and storage containers will be ordered. The training of the soldiers as crew and maintenance personnel will also be part of the contracts.”

Renderings released by the IDF of German Leopard 2 tanks show Trophy radar panels mated to the tank’s turret on either side of the main gun. And it’s not just the Germans who are experimenting with the Israeli technology: the United States has explored using Trophy to protect their Abrams main battle tanks as well.