Germany Decides to Acquire Its Own F-35s 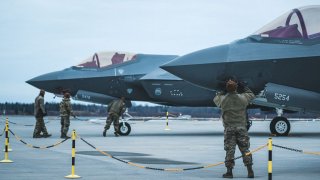 Though Berlin’s purchase is not huge, it puts Germany in a good position for nuclear sharing and NATO interoperability.

In a somewhat surprising move, Germany decided today that the replacement for its decrepit Tornado air fleet would be state-of-the-art. Rather than acquiring a newer but still fourth-generation fighter jet as a replacement, Berlin instead moved to acquire the American F-35A, arguably the most capable aircraft currently available.

“Today we are taking a good, an important step forward in equipping the Bundeswehr," German defense minister Christine Lambrecht said in a statement. She also explained that the F-35 offers excellent interoperability with NATO allies, particularly those countries that fly their own F-35s.

“Eight European allies have already introduced the Lockheed Martin multi-role combat aircraft or are in the process of procuring it,” the statement explained.

Due to Germany’s nuclear-sharing agreement in the NATO alliance, Berlin is obligated to maintain and fly aircraft that can deliver American-supplied nuclear weapons in defense of the alliance. However, the only German aircraft currently capable of delivering nuclear ordnance is, by aviation standards, decrepit. The Tornado fighter jet design first flew in 1974, nearly half a century ago, and has been relegated to museums in other countries.

The move to bolster Germany’s hollowed-out armed forces is an unexpected though logical development within the context of the ongoing Russian invasion of Ukraine. In addition to increased German defense spending, NATO has enjoyed its highest public approval ratings in decades. Moreover, two traditionally non-aligned states, Finland and Sweden, appear to be mulling NATO membership.

The recent deal may have given the French a scare, as Germany partnered with Paris to develop the FCAS Future Combat Air System, a fifth-generation, home-grown European fighter. To alleviate any worries that Germany has lost interest in the Franco-German project, a statement added that Germany retains a “strong role” in the airplane’s future development.

Though the Defense Security Cooperation Agency has approved the sale, it is unclear when exactly Germany would take service of their thirty-five F-35s. Still, that day won’t come a moment too soon.