Germany Pivots Back to Coal as Russia Uses the Gas Weapon 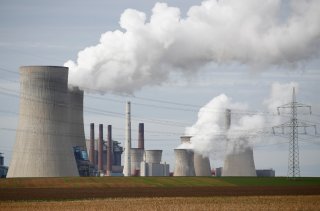 German minister for economic affairs Robert Habeck announced on Sunday that Berlin would seek to reduce its use of natural gas following a cut in supplies from Russia. Habeck indicated that Germany would make up for the shortfall in energy through the use of coal power plants, a step certain to frustrate some environmental advocates who have criticized the plants’ immense carbon footprint and environmental impact.

“To reduce gas consumption, less gas must be used to generate electricity,” Habeck wrote in a statement on Sunday. “Coal-fired power plants will have to be used more instead.”

Although Germany, along with most other members of the European Union, has committed to phasing out imports of Russian natural gas, the supply shortages in recent weeks have come from Gazprom, Russia’s state-owned natural gas giant. The Russian energy company has reduced supplies to Germany via the Nord Stream pipeline, claiming that the undersea pipeline is undergoing repairs.

However, Gazprom’s supply reductions to Germany are consistent with similar reductions elsewhere in Europe, a move that many observers have argued amounts to a punishment for the EU’s collective opposition to Russia’s invasion of Ukraine.

The decision to reintroduce coal plants—only months after German officials, led by Chancellor Olaf Scholz, pledged to eliminate the use of coal by 2030—has been politically controversial within Germany, triggering opposition from the Greens, one of the three parties making up Scholz’s “traffic light” coalition. Habeck called the step “bitter but indispensable” to make up for the country’s shortfall.

In addition to the use of coal plants, leaders in Berlin have also pledged to increase Germany’s imports of liquefied natural gas, or LNG, chiefly from the United States and Qatar.

While gas consumption is typically lower during the summer months, German officials have resolved to fill the country’s gas stockpiles in preparation for the winter, when it is widely used for heating. In the statement, Habeck estimated that the reserves were at 57 percent capacity, while the government had set a target goal of 90 percent by November.

Gazprom estimated last week that its exports to nations outside the former Soviet Union had decreased by 29 percent from January to June 2022 compared with the same period in 2021. The decrease in exports has led to cost increases throughout Europe, which Habeck blamed on the leadership of Russian president Vladimir Putin.

“It’s obvious that Putin’s strategy is to unsettle us by driving up the price and dividing us,” he said. “We won’t let that happen.”