Germany Says It Will Support Ukraine ‘as Long as Necessary’ 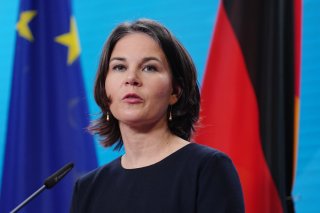 In a newspaper interview on Sunday, German foreign minister Annalena Baerbock reiterated the German government’s promise of strong support for Ukraine in its war against Russia, insisting that Berlin would continue to provide weapons, equipment, training, and financial assistance for “as long as necessary.”

In her interview with Germany’s Bild am Sonntag paper, Baerbock observed that the conflict appeared to be a stalemate and “could go on for years,” requiring long-term support from Germany and other Western nations.

“Unfortunately, we have to assume that Ukraine will still need new heavy weapons from its friends next summer,” the foreign minister said. She noted that Kyiv’s fight against Moscow helped to protect Europe from further Russian aggression, justifying Berlin’s involvement. “We [will] support them financially and militarily—and for as long as it is necessary,” Baerbock vowed. “Full stop!”

Baerbock, who has served as Germany’s highest-ranking diplomat since 2021, noted in the interview that Russian leader Vladimir Putin appeared to have miscalculated during his invasion, attacking with a fraction of Russia’s total army across a wide front with the expectation that Ukrainian defenses would immediately fall—an expectation that she derided as “delusional.”

The foreign minister also sought to reassure Germans that the government of Chancellor Olaf Scholz would attempt to “cushion” the country’s energy outlook for the fall and winter. Prior to February 2022, Russia regularly supplied more than half of Germany’s gas supply. In the aftermath of the invasion, Germany slashed its Russian gas imports but lacked an immediate alternative supplier, leading to concerns that the country might face heating or power shortages in the winter when demand is highest. Berlin has sought to stockpile natural gas beforehand, and the German economy minister recently claimed that the country’s gas reservoirs were filling up “faster than expected,” theoretically allowing it to avoid gas rationing and meet its goal of 85 percent storage capacity ahead of the target date in October.

Baerbock recommitted the government to this policy, indicating in the interview that she would categorically refuse to support the opening of the Nord Stream 2 pipeline—a gas pipeline running from Russia to Germany under the Baltic Sea that German regulators shelved at the beginning of the invasion.

Since the invasion, Germany has transformed its defense outlook by providing billions of dollars in weapons and financial aid to Ukraine and vowing to increase its defense spending. German government officials have also moved towards the nationalization of Gazprom Germania, a German subsidiary of Russia’s Gazprom gas giant, in recent weeks.