Germany's G3 Rifle Has Lasted Longer Than the FAL and M14 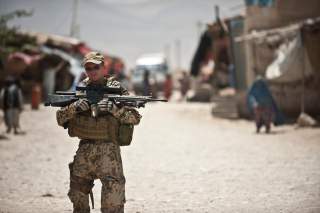 In stock configuration, the G3 is probably worse than the FAL and M14 for the shooter.

After World War II, the members of the North Atlantic Treaty Organization collectively decided to adopt a new class of infantry weapon.

The new battle rifles would arm almost every NATO nation by the 1950s were lightweight, box fed, and chambered in 7.61x51mm NATO. The Belgian FN FAL dominated this class of weapon, proving to be the most popular once also adopted across the Commonwealth and by many other nations in the third world and Europe. But it had two primary competitors, the German/Spanish G3/CETME and the American M14.

But all of these weapons, the only one that has “survived” in first-rate militaries to 2019 is the G3. The FAL and M14, even in their upgraded forms, have finally been retired from the front line of most militaries. But the G3 manages to soldier on and continues to see service in many larger militaries.

But what has made the G3 design so much more enduring than the FAL and M14? Is it actually a better rifle?

In stock configuration, the G3 is probably worse than the FAL and M14 for the shooter. Both the M14 and FAL have last round bolt hold open devices (in most configurations), the G3 does not. The G3 is notorious for a “violent” action, which beats up brass and the shooter’s face with how the stock is laid out. The charging handle on the G3 requires quite a bit of force to cock and open the action compared to the FAL and M14, due to having to unlock and open the rollers in addition to having to fight the recoil spring.

But what the G3 brings to the table is a free-floated barrel for accuracy, modularity, and reliability. Heavy 7.62x51 rifles have been phased out as a “standard” service arm, they now primarily see use as special “marksman” rifles. In that role, accuracy is paramount.

While the M14 has served in that role with the U.S. Army and Marine Corps, it has had tons of issues in that role. The history of accurized M14s is one of a finicky action and stocks and subpar results. On the other hand, the G3 action has been used as the basis for many extremely precise police and military sniper rifles, the PSG and MSG series, as well as simple marksman variants converted from existing guns.

The stamped metal receiver of the G3 makes mounting a scope mount child’s play on the G3, requiring only a simple claw mount that grabs onto the receiver or a rail welded onto the receiver itself. The M14 and FAL require more advanced mounting techniques such as a locking dust cover or drilling and tapping the receiver to mount scopes.

The modularity of the G3 also eases its conversion into a marksman rifle. The stock on the G3 can be swapped out easily by pushing out two pins, putting a new stock in place, and pushing them back in, allowing for installation of modern stocks. Changing the handguard is also two-pins simple. Sweden’s DMR variant of the G3, the AK4D, mounts a new handguard and stock via this method. Comparatively, putting an M14 in a “designated marksman” stock, such as the Sage EBR chassis is a long and involved process that involves proper tensioning and tuning.

Finally, the G3 is known for being incredibly reliable. While the FAL is also known for reliability, a lot of that is predicated on setting the rifle to the correct gas setting. Soldiers in the field with FALs may experience reduced reliability, crank up the gas, and then keep firing, albeit with more parts wear and recoil. The G3’s roller delayed system requires no soldier adjustment and keeps on firing consistently even when grime and dirt build up in the action.

Comparatively, the FAL’s success in the modern era as a marksman rifle is far smaller, with only South Africa and Brazil building variants of the FAL for designated marksmen in large numbers. While the M14 served decently in American service during the Global War on terror, the U.S. Army and Marine Corps have largely phased them out in favor of the newer, AR-based SASS, CSASS, and SDM-R rifles which are far easier to maintain and use.