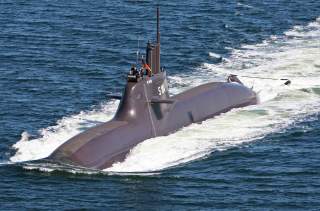 Unfortunately, the German Navy found itself in a similar position in the Spring of 1941 when confronted with aerial torpedoes.  In a letter posted to his wife before the first operational sortie of the Bismarck, the ship’s designer, Heinrich Schlüter, bemoaned the naval bureaucracy’s decision to limit the ship’s armored belt to essentially the ship’s waterline; just high enough to allow air-launched torpedoes to incapacitate the ship, and lead to its sinking.  Just like Thomas Andrews who designed the Titanic, Herr Schlüter went down with the Bismarck when it was sunk.

The German Navy’s current condition is a true “Schande;” an embarrassment for Europe’s wealthiest country. The German Navy needs to immediately advocate to increase its budget and capabilities.    Its mission in the event of hostilities in the Baltics is essential for NATO; it needs to be funded to carry out this mission. It needs to modernize its planning and procurement processes.  One hopes the new Grand Coalition (GroKo) is serious when they talk about a “restructuring of the German procurements agency (BAAINBw).”  It desperately needs to put real thought into what its ships are likely to have to do in a crisis or war, specify them accordingly, and acquire realistic stocks of spares and munitions.

John Beckner is a Defense and Aerospace Consultant and has been living and working in Europe (Brussels/Munich) since the late 1980’s.  He has been a keen observer of European and NATO defense policy; both in industry and working for the U.S. Government.