This Is Germany's Plan to Defend Against Russia's Deadly Missiles 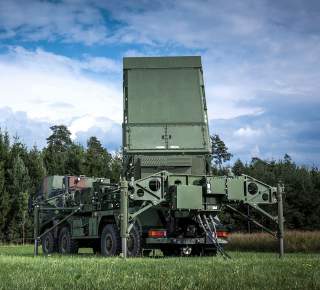 In August 2018 it was reported the German Ministry of Defense is reportedly negotiating with an international consortium formed by Lockheed Martin and MDBA on cost to acquire their Medium Extended Air Defense System, a mobile point-defense system designed to shoot down everything from ballistic missiles to fighters, cruise missiles, drones and helicopters. If a suitable deal can be reached—and the first attempt a few years ago foundered on cost-issues—then the program will require approval by the Bundeswehr.

MEADS has a particularly tortured development history, originating as a s joint venture between the U.S., Germany and Italy intended to replace the Patriot missile. However, the U.S. Army simply didn’t want MEADS, so first the U.S. in 2009 and then Germany in 2011 pulled out of purchasing it—though Washington was cajoled into funding its development anyway. Thus the three countries spent $4 billion to nearly complete development of a weapon that was nobody was willing to purchase.

However, in 2014 Russian forces invaded the Crimean Peninsula and Eastern Ukraine, and Berlin realized it could no longer allow its military to rust away from neglect. Since then Moscow has deployed nuclear-capable Iskander ballistic missiles to its enclave in Kaliningrad which could land a fast and deadly strike on Berlin traveling at six times the speed of sound.

Germany considerably downsized its air defenses in the two decades following the end of the Cold War. Currently, the Luftwaffe operates a single Air Defense Missile Wing with three Groups armed with Patriot missile batteries all based in northern Germany and a fourth group equipped with Short-Range Air Defense systems to protect forward-deployed troops and bases from low-altitude attacks and even rocket or mortar fire.

In 2015, MEADS beat out upgraded Patriot missiles in a competition for a new TLVS Tactical Air Defense requirement—but then negotiations dragged on for years. The bill for procuring MEADS was supposed to be $4.5 billion, but private sources claimed the industry was asking for $9-10 billion! The second-round of negotiations in the summer 2018 will determine whether MEADS finally enter service.

Yes, you heard the last item right: though MEADS is distinct from a Patriot missile battery, it does use the advanced version of the American missile. The PAC-3MSE is a “hit-to-kill” weapon designed to physically impact targets—which can include short or intermediate-range ballistic missiles like Russia’s Iskander—while traveling at four-times the speed of sound. Initially guided by the MEAD’s Active Electronically Scanned Array MFCR radar, the PAC-3 uses a built in Ka-band radar seeker and second maneuvering pulse from its rocket motor to ensure it rams its target in the terminal phase. It still carries a “lethality enhancer” warhead that blasts a spread of twenty-four tungsten fragments to guarantee a kill.

MEADS differs from a regular PAC-3 battery in that it has 360 degree radar coverage, rather than 120 degrees. Combined with it highly-maneuverable missiles, that means the MEADS can engage attacks coming from all directions—including “over the shoulder” shots. You can see this capability demonstrated in a 2013 test at White Stands missile range in which a MEADS destroys in rapid succession a Hawk missile and a QF-4 Phantom drone approaching from opposite directions.

It’s also more capable of keeping up with advancing ground forces in the field than the PAC-3, and can be air transported using larger A440M and C-17 transports, though apparently only some of the vehicles will fit in a C-130. Despite its role supporting maneuver ground forces (not from the frontline, but just behind it), the MEADS’s anti-ballistic missile capabilities mean it would also be deployed for local defense of key military bases and major cities. If necessary, a MEADS battery can be stripped down to a firing element of just one MFCR radar (which takes over the surveillance radar’s function), the TacOps vehicle, and two launchers. Another key advantage is supposed to be financial: MEADS requires fewer personnel and will have 1/3 the operating cost of Patriot batteries.

Crucially for a country surrounded by NATO allies, Germany designed MEADS to network with and even control friendly air defense platforms ranging from ground-based radars, other types of surface-to-air missiles and orbiting AWACS radar planes. A new “Mode 5” Identify Friend-or-Foe system is also designed to reduce the likelihood of a tragic friendly fire incident. This “plug-and-fight” capability also makes it easier for mobile radars and missile batteries to quickly launch missiles, then switch off and relocate to avoid a retaliatory barrage—and finally plug back in for another shot.

In fact, MEADS is expected to integrate a backup missile system derived from the IRIS-T infrared-guided air-to-air missile. The IRIS-T Surface Launch System would have a range of seventeen miles, and is reputed to be particularly well suited for intercepting highly maneuverable targets. Because the PAC-3MSE missile cost an eyewatering $3.4 million each, the thinking goes that the $455,000 dollars IRIS-T SLSs would handle easier or more numerous targets (drones, cruise missiles, helicopters), while the PAC-3 tackles higher-flying threats.

A final intriguing aspect is the MEADS’s UHF surveillance radar, intended to scout out approaching aerial threats from a longer distance. Such low frequency radars are unusually effective at detecting (but not targeting) stealth fighters, and could be used to cue the X-Band fire-control radars once a stealth aircraft enters a vulnerable range window. NATO doesn’t seem likely to encounter many stealth threats soon with the freezing of Russia’s Su-57 stealth fighter program, but it’s wise to plan ahead.

If the Defense Ministry arrives at an acceptable deal and it is approved by the Bundeswehr, the Luftwaffe would likely take into service eight to ten MEADS batteries to replace its twelve Patriot batteries. Italy has not committed to buying the system it funded, though it might be interested in acquiring a battery for missile defense of Rome. The MEADS consortium is also investigating foreign sales on the frontline of NATO-Russia tensions, having proposed the system to Poland, the Baltics, Romania and Turkey.

One detail missing from publicly available descriptions of MEADS, however, is range. The PAC-3 MSE missile reportedly has a range of eighteen to twenty-one miles, and Lockheed claims MEADS will be able to make use of the “full extent” of the missile’s possible range. Even then, MSE missile is unlikely to have the range of the less sophisticated PAC-2 missile, which is lacking in anti-ballistic missile capability, but can hit aircraft sixty (or some sources claim one hundred) miles away—and is still considered a medium-range missile. This is to say that due to reliance upon the PAC-3 anti-ballistic missile interceptors, MEADS may have a short reach compared to other medium-range systems like the Russian S-350, a factor said to be behind the U.S. Army’s reluctance to adopt the system. However, MEAD’s ability to integrate with existing missile batteries—or even ones introduced in the future, thanks to its open architecture—may still allow it to serve as a potent force multiplier.

Sébastien Roblin holds a master’s degree in conflict resolution from Georgetown University and served as a university instructor for the Peace Corps in China. He has also worked in education, editing, and refugee resettlement in France and the United States. He currently writes on security and military history for War Is Boring .