Get Ready, China: Could the U.S. Marines Be Heading to Taiwan? 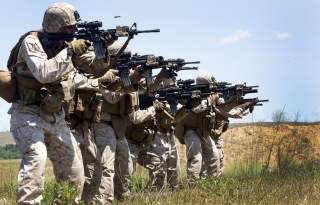 The U.S. State Department has issued a request for U.S. Marines to be stationed in Taiwan for the protection of diplomatic personnel in Taipei, according to CNN. The request comes as China ramps up military exercises in the Taiwan Straits amid a looming trade war with the United States.

- The American Institute in Taiwan has functioned as the diplomatic outpost on the island since 1979. Over 450 personnel work at AIT (which boasts an impressive three star rating on Yelp.)

- The Marines requested by the State Department would be tasked with guarding AIT. The American military hasn’t had a permanent presence in Taiwan since 1979.

- China Foreign Ministry spokesman Lu Kang told reporters on Friday that “the ‘One China’ principle is the political foundation for China-U.S. relations, “and called the arrangement “not negotiable.”

- Speaking on Thursday, Chinese President Xi Jinping said that China “cannot lose even one inch of the territory left behind by our ancestors.” The statement followed a visit to Beijing by Secretary of Defense Jim Mattis.

- Adding to the tension, Rim of the Pacific Exercise 2018 kicked off Friday. China was disinvited from the multinational maritime warfare exercise in May over the militarization of the South China Sea.

The deployment of Marines to Taiwan would signal to America’s allies in the South Pacific that the U.S. is resolved to act as a bulwark against aggressive Chines foreign policy. But it could also be a tripwire in the event that China invades the island.