Get Ready for the Next Level of Hypersonic Missile Mayhem 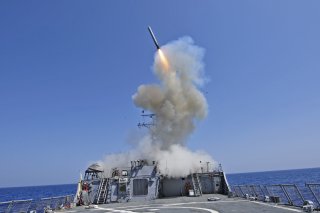 A hypersonic cruise missile launched from a submarine could change the paradigm associated with a Tomahawk land-attack missile. A Tomahawk missile flies roughly five hundred miles per hour but a hypersonic cruise missile travels at five times the speed of sound. A Tomahawk missile is known to give commanders a significant stand-off range of up to nine hundred nautical miles. An adversary targeted by a weapon traveling that distance at five hundred miles per hour would have time to detect and potentially respond to an incoming Tomahawk missile. By comparison, what would a hypersonic missile mean to enemy defenses? Certainly, an incoming salvo of submarine-launched hypersonic missiles would present problems for any kind of adversary.

This is the premise upon which the Navy is planning to deploy its emerging new hypersonic Conventional Prompt Strike (CPS) missile from Virginia-class attack submarines by 2028, according to a 2021 Congressional Research Service report titled Hypersonic Weapons: Background and Issues for Congress. The CPS hypersonic missile is a boost-glide weapon built to send a common glide body up along the boundaries of the earth’s atmosphere. The weapon uses the speed of its descent to impact upon and destroy a target. Given how short its travel time is and its ability to maneuver, a submarine-launched hypersonic missile will present a dilemma to an enemy.

This is a potentially significant development, given that Virginia-class attack boats are engineered with a number of impactful improvements enabling more closer-in, clandestine reconnaissance and attack missions. Being less detectable undersea with a new generation of quieting technologies, Virginia-class submarines are increasingly able to reach coastal areas and other high-threat locations much more easily than surface ships can. Of course, this would enable possibilities for closer-in attacks upon inland enemy targets, extending strike range and of course even further reducing the time from launch to impact. This kind of attack potentially places an enemy at risk in new ways, presenting offensive advantages unparalleled in modern submarine warfare.