Get Ready, Russia: The Army Is Sending More Weapons to Europe 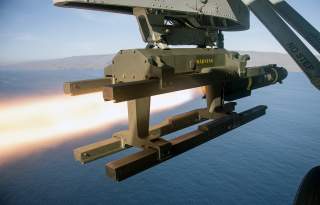 Worshim said the Army sent a solicitation to a group of more than 500 weapons developers, looking for missiles, guns and other weapons like a 30mm cannon able to integrate onto a Stryker vehicle. For its near-term, Interim SHORAD, the Army selected a Stryker vehicle some time ago; more recently, however, the service has made the decision to arm the vehicle with a Raytheon Stinger missile and Leonoardo-DRS mission system, according to a report from Defense News.

The program, which plans to deploy its first vehicles to Europe by 2020, is part of an Army effort called short-range-air-defense - Initial Maneuver (SHORAD).

Given that counterinsurgency tactics have taken center stage during the last 15 years of ground wars in Iraq and Afghanistan, the Army now recognizes a need to better protect ground combat formations against more advanced, near-peer type enemy threats - such as drones, helicopters or low-flying aircraft.

“We are looking for an end to end system that is able to detect and defeat the rotary wing fixed wing and UAS (drone) threat to the maneuvering BCT (Brigade Combat Team),” Col. Charles Worshim, Project Manager for Cruise Missile Defense Systems, told Warrior Maven in an interview earlier this year.

Worshim said the Army sent a solicitation to a group of more than 500 weapons developers, looking for missiles, guns and other weapons like a 30mm cannon able to integrate onto a Stryker vehicle. For its near-term, Interim SHORAD, the Army selected a Stryker vehicle some time ago; more recently, however, the service has made the decision to arm the vehicle with a Raytheon Stinger missile and Leonoardo-DRS mission system, according to a report from Defense News.

Although drone threats have been rapidly escalating around the globe, US enemies such as the Taliban or ISIS have not presented air-attacking threats such as helicopters, aircraft or large amounts of drones. However, as the Army evaluates it strategic calculus moving forward, there is widespread recognition that the service must be better equipped to face technically sophisticated enemies.

"We atrophied air defense if you think about it. With more near-peer major combat operations threats on the horizon, the need for SHORAD and high-tier weapons like THAAD and PATRIOT comes back to the forefront. This is a key notion of maneuverable SHORAD - if you are going to maneuver you need an air defense capability able to stay up with a formation," the senior Army official told Warrior Maven in an interview.

As part of its emerging fleet of SHORAD Stryker vehicles, the Army is exploring four different weapons areas to connect with on-board sensor and fire control, Worshim said; they include Hellfire missiles, Stinger missiles, gun capabilities and 30mm cannons.

Also, it goes without saying that any kind of major enemy ground assault is likely to include long range fire, massive air support as well as closer in helicopters and drones to support an advancing mechanized attack.

As a result, ground infantry supported by armored vehicles, will need mobile air defenses to address these closer-in air threats. This is where the Stryker SHORAD comes in; infantry does not have the same fires or ground mobility as an armored Stryker, and hand held anti-aircraft weapons such as a hand-fired Stinger would not have the same defensive impact as a Hellfire or Stinger armed Stryker. In a large mechanized engagement, advancing infantry needs fortified armored support able to cross bridges and maneuver alongside foot soldiers.

Chinese or Russian helicopters and drones, for instance, are armed with rockets, missiles and small arms fire. A concept with SHORAD would be to engage and hit these kinds of threats prior to or alongside any enemy attack. SHORAD brings an armored, mobile air defense in real-time, in a way that most larger, less-mobile ground missiles can. PATRIOT missile, for instance, is better suited to hit incoming mid-range ballistic missiles and other attacking threats. While mobile, a PATRIOT might have less of an ability to support infantry by attacking fast-moving enemy helicopters and drones.

The Army is also developing a truck-mounted Multi-Mission Launcher designed to destroy drones and cruise missiles on the move in combat. The MML has already successfully fired Hellfire, AIM-9X Sidewinder missiles and other weapons as a mobile air-defense weapon. It is showing great promise in testing, fires multiple missiles, and brings something previous not there to Army forces. However, an Armed Stryker can fortify this mission - by moving faster in combat and providing additional armored vehicle support to infantry on the move in a high-threat combat environment.

The SHORAD effort has been under rapid development by the Army for several years now; last year, the service held a SHORAD “live-fire shooting demo” at White Sands Missile Range, N.M., where they fired a number of emerging platforms.