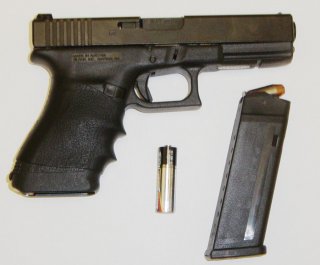 45 Auto, also known as 45 ACP is a beefy cartridge developed in 1905 by John Moses Browning. Glock has a new take on that cartridge, melding a relatively modern design with the 115-year-old round. Does Glock have a viable platform for the 45 auto, or are the old ways truly better. Let's take a deep look in my review of the Glock 21.

The accuracy of a weapon is almost always its greatest strength and the Glock 21 is a straight shooter through and through. The hits always felt tight and landed where I was aiming with little to no deviation. Glock is known for its unique but solid builds. They’re reliable and will work just as advertised (we don’t need to talk about the .22 Glock). This build quality is apparent when shooting for accuracy.

I always shoot my pistol between 7 and about 30 yards. At seven yards to about 15 yards is where I can put my shots on top of each other, farther out than that is where I can hit the target, but not as precisely as I’d like. At my optimal distance, groupings were hovering at a variation of a ½ inch and 1-inch difference in a standing unstabilized shooting position. Shots that were 1 inch apart were almost always shooter error. When I was braced against something, my groupings shrunk to a cool ¾ inch. I reckon that that speaks for itself.

The Glock 21 holds its own when it comes to clean shoots and pinging steel on target consistently.

It’s a Glock. What else is there to say?

I’ve personally never had a Glock jam on me, and the Glock 21 continues the streak in perpetuity. Glock’s claim to fame is the boxy design, light polymer build, and the fact that it just keeps shooting.

I’ve put well over 10,000 rounds through all my Glocks and about 1,000 through a brand new 21. Even during the break-in period, there were no stoppages. It had no problem in the hot Georgia sun, nor did it have trouble when I took it North with me in the Fall. It just works, all day, every day, every time.

Not everybody loves the feeling of operating a Glock, but I do, and the 21 feels great with a beefy round like the 45 ACP.

If you have or used a Glock, then you’re familiar with exactly what you’re getting into. It’s a bit wider than some other models, but it still feels natural in the hands and certainly familiar enough to operate with ease. There’s a backset of slide serrations for easy manipulations during reloads or, lord forbid, a malfunction. Additionally, it’s outfitted with the classic dotted texture handgrip. In the box, there are also a few different backstraps to customize the size of the grip.

Handling this pistol is easy and doesn’t require any special knowledge to operate.

You can also look into building your own Glock at 80 percent Arms.

It may seem like a small thing, but the mag capacity and classic Glock mag feel improved my good opinion of the 21 to a new level.

Instead of your classic 7+1 in a 1911, the Glock 21 holds 13 rounds plus one in the chamber. Now not only do you have a comparable capacity to 9mm mags, but you also have a stacked 13 rounds at your disposal.

The magazine itself is nothing new, and neither is the reloading. The mechanisms feel satisfying and the exact same as any other Glock. Plus, Glock mags are cheap as dirt.

The magazine and reloading procedure are rather insignificant and didn’t detract or add to the experience of shooting.

Unloaded, this gun is only 29 ounces, just shy of two pounds. The overall length is 8 inches so it’s an obvious full-sized gun. I really wished it was compact, but that’s the trade-off when you want a monster-hunting bullet. I tried to carry concealed, but I just found myself missing my Glock 19.

The old round shines, even more, when it’s being shot out a modern body with a modern design. The combined heavier weight of the Glock 21 and slow velocity of the 45 make for an easy shooting firearm. To expand on that, a higher firearm weight almost always means lower recoil since the weight is not so easily tossed aside by the energy of the cartridge. Secondly, the 45 is a slow-moving bullet with less energy out of the gate. These two factors together create a kick that is more reminiscent of a push instead of a snappy reaction. Nobody should have an issue with this weapon's recoil. It’s flat shooting with a 45! What not to like?

The Glock 21 is cruising at 547 big ones at the moment, which has been the case for years with other models.

They say that 45 is God’s caliber, and the Glock 21 is my preferred way of delivering it.