The Glock Handgun the Army Rejected Can Now Be Yours 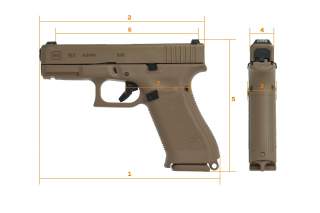 The Glock 19X may or may not have been the best pistol for the U.S. Army. Its unique features—a compact slide on a full-sized frame—don’t have directly practical application in the civilian world, except for perhaps police use. Most civilians would be just as well served buying a full-sized Glock 17 or the Glock 19. But if a private citizen wants the gun that could have become a U.S. military-issued weapon, or a Glock in any other color than coyote, there’s always the G19X.

Austrian Gunmaker Glock’s latest handgun is actually two existing handguns in one. The Glock 19X, meant to capture the U.S. Army’s Modular Handgun System contract, is actually a melding of the original Glock 17 and the compact Glock 19 resulting in a unique handgun configuration that very well could have become the next service weapon of the U.S. Armed Forces. Although the G19X lost out that distinction to the Sig Sauer P320 the pistol is available on the commercial market.

The U.S. Army’s XM17 Modular Handgun System competition was meant to field a replacement for 1980s-era Beretta M9 nine-millimeter handgun. The Beretta had one of the lowest rates in soldier confidence in the field. It was characterized as the least accurate and worst handling by combat troops in a government-sponsored Army small arms survey. Also, it was unable to take advantage in advances in handgun technology over the past thirty years. The Army refused to even consider an updated version of the pistol, the M9A3, for the MHS competition.

The Army wanted a handgun that was reliable, with a requirement that the winner be capable of firing five thousand mean rounds between failures, for a “98 percent probability of completing a 96-hour mission without a failure.” It wanted new features, including a threaded barrel for screwing on a suppressor, an under barrel Picatinny rail for aiming lights and lasers, and a modular ergonomic system to accommodate a wide variety of hand sizes.

After a competition that lasted several years, the Army settled on the Sig Sauer P320, with the Marines and likely the rest of the U.S. Armed Forces falling behind.

Glock officials complained that the Army’s selection of Sig Sauer over Glock was driven by cost over effectiveness and asked that testing continue. An official complaint filed by the Austrian gun company was rejected by the General Accounting Office. According to Glock, the GAO’s own report admitted that the Glock entry was actually more reliable but the Sig weapon was cheaper.

The Glock G19X is a familiar looking pistol to Glock fans; it takes the full-sized frame of the Glock 17 and mates it with the compact slide of the Glock 19. The result is a handgun with a shorter barrel for use inside the cramped confines of a military vehicle while still retaining a large magazine capacity. The company calls the resulting weapon a “crossover pistol,” similar to efforts by Colt in the twentieth century to create a shorter version of the M1911A1 pistol for military service.

The G19X is the first Glock handgun offered with a factory colored slide. The G19X was offered in coyote, a sandy brown color that blends in well with the terrain where America’s wars have been fought since 9/11. The slide is finished in nPVD, a corrosion-resistant coating that is unique to the new pistol and bonded to the slide via physical vapor deposition in a vacuum environment.

The G19X was also likely the first Glock with a customizable frame size. Generally, Glock’s solution to ergonomics has been to offer different sized pistols in different calibers in full-sized, compact and subcompact frame sizes. The G19X comes with two backstrap sizes, allowing the user to change the circumference of the grip to suit his or her hand size. The pistol also featured an ambidextrous slide stop and reversible magazine release.

The Glock 19X may or may not have been the best pistol for the U.S. Army. Its unique features—a compact slide on a full-sized frame—don’t have directly practical application in the civilian world, except for perhaps police use. Most civilians would be just as well served buying a full-sized Glock 17 or the Glock 19. But if a private citizen wants the gun that could have become a U.S. military-issued weapon, or a Glock in any other color than coyote, there’s always the G19X.