Going Fishing: The Taiwanese Air Force Is Preparing for a Fight With Their Eye on China 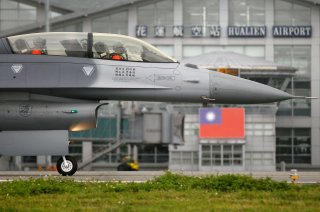 Living on China’s doorstep is an exercise in patience. As the country with the second-largest military budget in the world, China is well positioned to eventually invade Taiwan, which China sees as a rogue province rather than an independent country.

And Taiwan is in an unenviable position—the island of democracy in the South China Sea is a mere 100 or so miles—about 160 kilometers—from mainland China. The tiny republic has neither the military budget nor the manpower to guarantee a win in a potential fight against China. But, Taipei might just be able to make the cost of winning so great for Beijing, that a Chinese invasion never comes.

Any attack by China on Taiwan is sure at some stage to include hundreds of ships sailing across the Taiwan Strait. This is where Taiwan could excel—repelling an amphibious Chinese invasion. Taiwan boasts a large assortment of missiles that have a modest 100-150 mile range and are intended to take out Chinese ships.

Photos recently surfaced online that show Taiwanese F-16s equipped with the American-designed Harpoon anti-ship missile. The photos, published in the Taiwanese Liberty Times, showed that the Taiwanese planes were also armed with AIM-120 a beyond visual range air-to-air missile, as well as smaller Sidewinder missile. The display was considered by some as a pointed show of force for an island country that has typically tried to keep the waters between the two countries calm.

A long-standing dispute between China and Taiwan over the Dongsha Islands may have prompted the recent Taiwanese Harpoon missile display. The islands, actually three small atolls, lie in the South China Sea and could become strategically important if they were to be fortified or militarized.

Earlier this year, reports surfaced that claimed PLA troops were preparing drills and military exercises that simulated the takeover of the Dongsha Islands. If China were to take over the islands, Beijing could better access the South China Sea and the Pacific Ocean.

If a China-Taiwan conflict were to break out, the island republic’s Harpoon missiles could factor heavily in hampering the People’s Liberation Army Navy. Getting the missile in the air is a strong message to Beijing—Taiwan may have a smaller military and by comparison a miniscule defense budget—but the island republic could nevertheless send Chinese ships to the bottom of the Taiwan Strait.