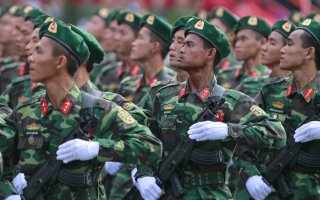 In late November, Vietnam announced that the Vietnam International Defence Expo will be held from December 8 to December 10 at Gia Lam airport in Hanoi. The International Defence Expo implicitly signifies Vietnam’s ongoing efforts to diversify its supply of weapons in order to reduce its heavy reliance on Russian arms sales and further its internal hedging strategy against China.

At a press conference on November 24, Maj. Gen. Nguyen Viet Hung, the deputy political commissar of the General Department of Defence Industry, asserted that “local and foreign companies are set to display combat vehicles, technologies, weapons and equipment for the navy, army, air force, and cyber warfare weapons.” He further noted that “the expo aims to promote international cooperation in defense, build trust between Vietnam and other countries, and introduce the technology and production capacity of Vietnam’s defense industry,” adding that “the exhibition would help Vietnam diversify procurement to serve the production of weapons and technical equipment.”

At Vietnam’s invitation, forty-five foreign delegations registered to take part in the expo. Specifically, booths will be hosted by 170 enterprises from thirty countries, including the United States and Russia. Meanwhile, Vietnam will exhibit military products created by the Defence Ministry’s departments, such as the General Department of Defence Industry, the Military Technology Academy, the Vietnam-Russia Tropical Centre, and the Viettel Group.

The expo reflects Vietnam’s effort to diversify its weapon suppliers and promote defense cooperation with countries other than Russia, which has been Vietnam’s key arms provider. Vietnam has relied heavily on Russian arms due to its Cold War ties with the Soviet Union. According to the Stockholm International Peace Research Institute (SIPRI), from 1995 to 2021, imports from Russia made up $7.4 billion of Vietnam’s $9.07 billion in total arms expenses. However, as Vietnam seeks to diversify its arms trading partnerships, the purchases of Russian military products may be decreased. This diversification of suppliers may include an expansion of security and defense partnerships to diminish Hanoi’s reliance on a single partner, a necessary step to bolster the country’s security and autonomy.

Vietnam’s defense diversification fits in with the great powers’ influence-seeking strategy of pursuing defense agreements with Vietnam, particularly in the context of the U.S.-China strategic rivalry and Russia’s war in Ukraine. On the surface, the formulation of defense partnerships might be seen as a tradeoff between autonomy and security since Vietnam may have to depend heavily on arms suppliers. However, the diversification strategy offers Vietnam an alternative way of handling this dilemma by avoiding sacrificing autonomy for security interests.

Some analysts argue that Vietnam’s overreliance on Russian weaponry has resulted in Hanoi abstaining from UN resolutions condemning Russia over the Ukraine war. However, forging partnerships with diverse weapons suppliers may mitigate any vulnerability to coercion from a more powerful partner like Russia, which is able to exploit Vietnam’s reliance on their bilateral defense relationship. Moreover, an increase in the number of arms providers will expand Hanoi’s options for diplomatic support when it faces security challenges. This rationale is presented in a traditional Vietnamese saying: “one stick is easy to break, but many sticks are hard to break,” which Vietnamese officials often employ in the context of strengthening defense ties with other countries. As Maj. Gen. Nguyen Viet Hung proclaimed, the International Defence Expo is important because it “is an occasion for Vietnam to diversify suppliers of goods serving arms forces and national defense.”

Considering that Russia has been China’s main supplier of weapons and that China has been increasingly aggressive in the South China Sea, Vietnam clearly needs to diversify its arms providers. SIPRI estimates that from 2016 to 2020, China imported 77 percent of its total weaponry from Russia. During the same period, China was Russia’s second-largest arms purchaser, just behind India.

Vietnam does not favor the use of force in the South China Sea disputes, however, so it is hard for it to negotiate with its bare hands. As Deputy Minister of Defence Nguyen Chi Vinh noted in 2013, “Vietnam is buying military equipment for self-protection purposes.” He further stressed in 2020 that “a characteristic of defense foreign affairs is confidence building,” adding that “in peacetime, this is a very special force to protect peace and friendship between nations by cooperation and commitments not to use force in all matters of international relations.” Likewise, analyst Nguyen Vu Tung noted in a 2010 piece that “territorial disputes can make it more appealing to develop military capabilities and procure new weapon systems to support territorial claims and deal with anticipated conflicts over disputed areas.” He went on to explain that “arms purchase, therefore, is a part of a bigger defense policy.” This is to say that the increased procurement of military supplies is vital for Vietnam’s efforts to address the threat from China.

The diversification of weaponry providers fits with Vietnam’s overall defense policy. It first offers Vietnam an opportunity to learn about global developments in military equipment to enhance its national defense capabilities, thus enabling the Vietnamese Communist Party to sustain its legitimacy in the eyes of the people. More importantly, the diversification underpins Vietnam’s internal hedging strategy against Chinese aggression in territorial and maritime negotiations.