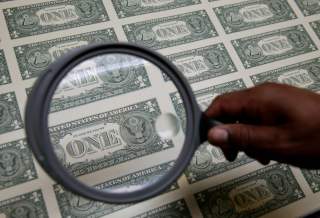 Milton Friedman (1951, 1960) provided influential back-of-the-envelope estimates of the costs devoted to extracting gold under what he called a “strict” gold standard. I have criticized those estimates elsewhere (White 1999, pp. 42-48) for exaggerating the volume of gold reserves used by actual gold-standard economies, and thus exaggerating the resource cost. Friedman’s estimates assumed a 100 percent gold reserve ratio against demand deposits (1951) or against all bank deposits (1960), whereas sophisticated banking systems in gold-standard economies historically operated on small prudential reserve ratios (as he elsewhere recognized). Plugging a historically observed 2 percent reserve ratio against all the bank liabilities in the broad monetary aggregate M2, rather than Friedman’s 100 percent, yields a resource cost estimate one-fiftieth of his 1960 figure, namely 0.05 percent rather than 2.5 percent of national income.

President Nixon closed the gold window in 1971, ushering in our present era of fiat money. As inflation rose and became more variable, people began acquiring gold and silver coins and bullion for hedging against fiat money regimes. Friedman to his credit was alert to the resource costs of the gold and silver acquisition that emerged. In a note on “The Resource Costs of Irredeemable Paper Money” he observed (Friedman 1986, p. 644):

Recent data on gold production from the World Gold Council (2019) allow us to revisit the question with something better than casual empiricism, and to reach a conclusion.[1] Plugging recent numbers from the World Gold Council into Friedman’s own model, it is fairly clear that gold coins and bullion in recent years have been produced in greater volumes than would have been the case under a gold standard with reasonable prudential reserve ratios, and thus gold-extraction resource costs have been higher under fiat money in practice. Note that this accounting effort provides an underestimate of the total resource costs induced by fiat money, because it neglects the costs incurred in acquiring silver, collectibles, cryptocurrencies, and other inflation hedges.

Private stocks of gold coins, bullion, and exchange-traded funds have grown so much since 1971 that they now exceed official gold reserves. The World Gold Council reports that the planet’s above-ground stocks of gold at the end of 2018 totaled 193,473 tonnes, divided in the following proportions: 47.6 percent jewelry (92,043 tonnes); 21.3 percent private investment holdings of coin, bullion, and ETFs (41,279 tonnes); 17.2 percent official holdings by central banks, Treasuries, and the IMF (33,230 tonnes); and 13.9 percent “other” including mainly industrial inventories (26,921 tonnes). Data on the Council's website go back to 2006. If we contrast 2018 figures with 2006 figures, we find that of the estimated 35,473 tonnes of gold produced overall during the period, 15,479 tonnes or 43.6 percent went into private investment holdings. Meanwhile the stock of jewelry grew 12.7 percent, and official holdings grew 16.6 percent. (Curiously, some countries have been adding to their official gold holdings despite being on fiat standards.)

The purchasing power of gold has risen substantially since leaving the US left the Bretton Woods dollar-gold-exchange standard for the fiat dollar. When President Richard Nixon “closed the gold window” to end what remained of gold redemption of the US dollar on August 15, 1971, the official par value was $35 per ounce, while the market price had floated to $44.60. In the last half of 2019, with fiat standards prevailing around the world, the price of gold has hovered above $1450 per ounce. The ratio of $1450 to $44.60 means that the dollar price of gold has risen more than 32-fold since August 1971. This increase is much greater than the increase in the dollar prices of goods and services in general, the GDP deflator index having increased about 5-fold between 1971Q2 and 2019Q2. Thus the purchasing power of gold in terms of goods and services has risen considerably. The rise is not principally due to higher gold mining costs (as shown by production volumes rising rather than falling), or growth in the non-monetary demand for gold (coin and bullion stocks having grown much more than jewelry stocks), but is principally due to increased demand for gold bars and coins by people hedging against the uncertain future value of fiat monies.

Combining the price and quantity numbers, we can make a back-of-the-envelope estimate of the share of real world output that has been going to produce gold coins and bullion. We begin with the value of the coins and bullion purchased 2006-2018. One metric tonne of gold is 1000 kilograms, which is equal in mass to 32,151 troy ounces, so 15,479 tonnes meant 497,665,329 ounces added to private investment holdings of gold coins, bullion bars, and bullion ETFs. Call this “monetary gold” for short. The average gold price over the period was $1224 per troy ounce.[2] Multiplying the ounces purchased by the price per ounce, the total value of monetary gold purchased worldwide was $609 billion over twelve years, or an average of $50.8 billion per year. Average world GDP over the period, as reported by the World Bank’s website, was $77.15 trillion per year. Dividing $50.8 billion into $77.15 trillion, we find that monetary gold purchases were about 0.066 percent of the world economy’s annual output. This figure is 32 percent larger than our estimate noted above (using Friedman’s method but with a reasonable fractional reserve ratio of 2 percent) that under a gold standard some 0.05 percent of national income would go to acquiring monetary gold. And so we conclude that going off the gold standard has not reduced the flow of resources used in producing monetary gold, but has increased it something like 32 percent above what a modern gold standard requires.

Put another way, private gold acquisition over recent years have been costing the world an estimated average of $12.3 billion per year (.066 percent minus .050 percent) times $77.15 trillion) more in production of coins and bullion than an international gold standard would have cost, not even counting recent gold acquisitions by central banks (or acquisition of investment-grade gold jewelry to be stored in vaults, a common practice in India and elsewhere). In a $92 trillion world economy (as projected for 2020), the excess annual cost of 0.016 percent comes to $14.7 billion dollars per year.

These estimates indicate that the historical switch from gold to fiat standards, contrary to the sincere hopes of Milton Friedman and other advocates of the switch, has increased the resource costs associated with the production of gold coins and bullion. Perhaps this was avoidable. The establishment of trustworthy non-inflationary fiat money systems (as Friedman of course prominently advocated) might have given private citizens no reason to invest in gold coins and bars, and might have brought a resource cost saving over the gold standard. But that experiment has not been run.

Resource costs are of course not the only criterion on which to judge the relative merits of gold versus fiat money standards. Other criteria include purchasing-power stability (low inflation) and predictability (strong anchoring of inflation expectations), the amplitude of cyclical variations and proneness to financial crises, and fiscal discipline (White 2015). What the recent data tell us is that lower resource costs in practice should no longer be considered a plus on the side of fiat money.

[2] This price is the simple average of annual average gold prices, 2006-2018 inclusive, in the series reported by Statista.

This article by Lawrence H. White appeared at CATO on December 17.