Good News, the F-35 Is One Tough Dogfighter 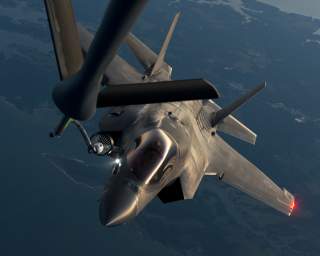 In June 2015, War Is Boring summarized a leaked official test report detailing a mock dogfight between a U.S. Air Force F-35 stealth fighter and an F-16, one of the planes the new F-35 is supposed to replace.

The dogfight did not go well for the F-35, which couldn’t accelerate or turn fast enough to keep up with the F-16. “The F-35 was at a distinct energy disadvantage,” the stealth fighter’s pilot — a former F-15 flier — wrote in his report.

(This article by David Axe originally appeared at War is Boring in 2016.)

But now a Norwegian test pilot has indirectly refuted the test pilot in a blog post on the Website of the Norwegian defense ministry. Norway is buying 52 F-35s are a cost of no less than $5 billion to replace the country’s current fleet of 1980s-vintage F-16s.

“I now have several sorties behind me in the F-35 where the mission has been to train within visual range combat one-on-one,” wrote Maj. Morten “Dolby” Hanche, a veteran F-16 pilot and Norway’s first F-35 flier. “My experience so far is that the F-35 makes it easier for me to maintain the offensive role [compared to an F-16], and it provides me more opportunities to effectively employ weapons at my opponent.”

According to the Norwegian defense ministry, Dolby has more than 2,200 hours in the F-16, is a U.S. Navy Test Pilot School graduate and now serves as an instructor with the 62nd Fighter Squadron, an F-35 training unit, at Luke Air Force Base in Arizona.

“So how does the the F-35 behave in a dogfight?” Dolby wrote. “The offensive role feels somewhat different from what I am used to with the F-16. In the F-16, I had to be more patient than in the F-35, before pointing my nose at my opponent to employ weapons; pointing my nose and employing, before being safely established in the control position, would often lead to a role reversal, where the offensive became the defensive part.”

“The F-35 provides me as a pilot greater authority to point the nose of the airplane where I desire,” Dolby continued. “The F-35 is capable of significantly higher angle of attack than the F-16. … This improved ability to point at my opponent enables me to deliver weapons earlier than I am used to with the F-16, forces my opponent to react even more defensively and gives me the ability to reduce the airspeed quicker than in the F-16.”

“In the defensive role the same characteristics are valuable,” Dolby explained. “I can whip the airplane around in a reactive maneuver while slowing down. The F-35 can actually slow down quicker than you’d be able to emergency brake your car. This is important because my opponent has to react to me stopping, or risk ending up in a role-reversal where he flies past me.”

In short, the F-35 is an excellent dogfighter, according to the Norwegian pilot. But Dolby stressed in an earlier testimonial that he doesn’t believe an F-35 will actually need to fight at close range, as its stealth, sensors and beyond-visual-range missiles will allow it to destroy its opponents at great distance.