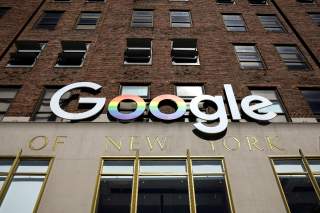 A think tank that routinely criticizes Sen. Josh Hawley for railing against big tech failed to disclose its Google backing in a report Tuesday hitting the senator’s fight against the Silicon Valley giant.

The Missouri Republican’s attempt to amend a 1990s-era law providing internet companies broad immunity from being sued for content others post on their websites could erode free speech, Diane Katz, a senior research fellow at the conservative Heritage Foundation, noted in the report. She also said in the report that free enterprise is a better way to approach online censorship.

Katz does not mention in the report that The Heritage Foundation receives contributions from Google, according to the tech company’s public policy transparency page. Google lists Heritage Action and Heritage Foundation on its list of trade associations and third-party groups that receive the most amount of financial assistance from Google. The tech giant updates the list twice a year.

Katz’s report got the attention of Google employee Nu Wexler, who is on the company’s policy communication team. He posted tweets Tuesday highlighting sections from the report that promote the social good Facebook and Google provide people.

Google and The Heritage Foundation made news in April. Heritage Foundation President Kay Coles James was slated to take up a position on Google’s Advanced Technology External Advisory Council. The panel was later canceled after more than 1,000 “Googlers” signed a petition saying Coles James’s supposedly anti-immigrant positions run contrary to Google’s ethics. The board survived for slightly more than a week.

Hawley introduced the Ending Support for Internet Censorship Act in June, which dramatically amends a Section 230 of the Communications Decency Act, which Congress passed in 1996 when the internet was young and growing. Congress was concerned at the time that subjecting the fledgling platform to the same civil liability as all other businesses would stymie growth.

The bill, if it becomes law, would provide big tech companies such immunity only if they can show they are politically neutral. The proposal received lukewarm response from some conservatives.

Katz crystallized opposition to the bill. “The better response to bias concerns is not government speech controls, but empowering consumers, investors, and competitors to create alternatives, punish misdeeds, and reward excellence,” she noted in the Tuesday report. “In contrast, S. 1914, if enacted, would yield more harm than benefit, and would violate fundamental conservative principles.”

Hawley is making a name for himself as the lawmaker willing to target the tech titans but not every conservative is on board. Pundits were quick to suggest he is misinterpreting the law. Section 230 states that “no provider or user of an interactive computer service shall be treated as the publisher speaker of any information provided by another information content provider.”

“Senator Hawley’s misguided legislation sets the table for stricter government control over free expression online,” Billy Easley of Americans for Prosperity said in a statement in June after Hawley delivered his proposal.

Google has not responded to the Daily Caller News Foundation’s request for comment. Hawley’s office has not provided a statement addressing Heritage’s apparent oversight. Heritage, for its part, dismissed the need to provide any disclosures on the basis that the bulk of its funding does not come from Google.

“Total corporate support for Heritage amounts to less than 2% of operating contributions and has no influence on our policy recommendations,” Gloria Taylor, an economic policy media representative at Heritage, told the DCNF. “You may note that Heritage recently made public a months-long dispute with YouTube/Google over their censorship of a Heritage video that’s still live on other platforms.”