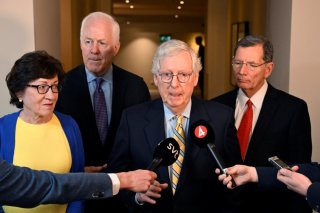 A Senate GOP delegation traveled to Ukraine over the weekend to meet with top Ukrainian officials in Kyiv.

“Ukraine is not asking anybody else to fight their fight. They only ask for the tools they need for self-defense,” McConnell said in a statement, according to the Washington Post. “America’s support for Ukraine’s self-defense is not mere philanthropy,” the statement continued. “Defending the principle of sovereignty, promoting stability in Europe, and imposing costs on Russia’s naked aggression have a direct and vital bearing on America’s national security and vital interests.”

Zelenskyy said Russia should be labeled a state sponsor of terrorism, a position that McConnell supports. McConnell, who has endorsed President Joe Biden’s handling of the Russo-Ukrainian War, echoed the White House’s stance that U.S. military aid to Ukraine must keep flowing as long as the war continues. “...the United States stands squarely behind Ukraine and will sustain our support until Ukraine wins this war.” It is also essential that America not stand alone, he said, adding that “[i]t is squarely in our national interest to help Ukraine achieve victory in this war and to help Ukraine and other countries deter other wars of aggression before they start.”

The GOP delegation trip coincided with a Senate vote on a $40 billion assistance package to Ukraine. The bill, which was widely expected to pass in a bipartisan fashion, was blocked by Senator Rand Paul (R-KY). Paul, who opposes the bill in principle, has called for a special inspector general to oversee how the money is being spent. McConnell and Majority Leader Chuck Schumer (D-NY) offered to hold a vote on Paul’s proposal, with a sixty-vote threshold, as a compromise. Paul has refused, arguing that the inspector general appointment should be baked into the bill.

Ukrainian officials lashed out at Paul, with presidential adviser Mykhailo Podolyak haranguing the Kentucky senator on Twitter. “We all saw a @CNN video where Russian soldiers shot civilians in the back just for fun. How many such crimes are happening at the moment in the east and south of Ukraine? Price of delay per day – hundreds killed and raped. Price per week – thousands. Have a nice morning coffee, @RandPaul,” he tweeted.

McConnell said he expects the Ukraine aid package to be approved by the Senate in the coming days. “It’s no secret Rand and I hold different world views,” he added. “We’ll get the job done by Wednesday.”