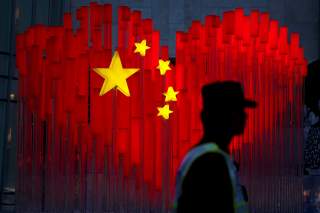 The regime in Beijing, which founder Mao Zedong called “New China,” will look powerful—invincible even—on Tuesday when the Communist Party celebrates the 70th anniversary of its rule with a military parade meant to intimidate onlookers both home and abroad.

Not everyone, however, is impressed. “Cracks,” CNN tells us, are starting to appear in Xi’s “façade.”

Yes, Chinese communism could be just a few cracks from breaking apart. Why? Chinese leaders are no longer in complete control of their destiny.

For more than two millennia, China’s emperors knew how to maintain themselves in power. In fact, they and Japanese and Korean rulers “traditionally maintained internal stability by keeping their borders sealed,” Arthur Waldron told me this month. “They understood what today we would call globalizing forces could uncontrollably topple their precarious internal hierarchies.”

As the famed China historian at the University of Pennsylvania noted, “the fear of simple horse trading led the Ming dynasty to build immense, useless walls.”

Japan and South Korea later opted for openness. North Korea is determined to remain shut. All three, for vastly different reasons, have models that look sustainable.

China, however, is half-open and half-closed, and as a result is neither sturdy nor sustainable. This means outside forces—such as customers like the United States—have influence.

Xi’s answer is to reverse course and close itself off. His role model is Mao, who did exactly that, ending the relative openness of Chinese society under Chiang Kai-shek’s Nationalist Party rule.

Now, Xi is attempting to regain control by, for instance, repudiating the gaige kaifang—“reform and opening up”—policies of Deng Xiaoping, Mao’s mostly pragmatic successor. The current supremo has worked to bulk up the state sector at the expense of foreign companies and domestic entrepreneurs, to cut off dissenting voices in the Communist Party and society at large, and to vigorously promote Chinese culture as a cure for foreign influence.

And not just the Party. Xi has been dropping increasingly explicit hints that tianxia—“All Under Heaven”—should be ruled from Beijing.

Yes, that’s ludicrous, but Xi apparently believes China now has the strength to successfully take on all others, including the United States.

Arrogance has limits, however. Xi’s assault on the rest of the planet, which a few years ago looked like it might succeed, is beginning to stall.

President Trump, reversing four decades of American “engagement” of Chinese communism, has moved with increasing speed this year to punish Chinese trade predation and theft. His actions are beginning to force companies to move factories out of the People’s Republic, and his administration is cutting flows of American technology to Chinese recipients, most notably the infamous Huawei Technologies. Trump, according to reports surfacing late last week, is even contemplating reducing—or even ending—American portfolio investment into China.

Moreover, Trump, despite pulling out of the Trans-Pacific Partnership in his first days in office, is slowly building up a network of trade agreements. The result of the effort could be an informal trading bloc that does not include China.

Xi doesn’t need more troubles. His economy is already stalling. It looked so weak at the end of last December that Xiang Songzuo of Renmin University in Beijing said China’s GDP growth at the time could perhaps be negative, and there has been steady deterioration since then.

Xi has a fundamental problem. His conception of China, like Mao’s, does not work. The People’s Republic of China, writes Fei-Ling Wang in The China Order: Centralia, World Empire, and the Nature of Chinese Power, is “a tenacious dictatorial state of ‘controlocracy’ and ‘sophisticated totalitarianism’ that in fact performs rather poorly.”

As Wang notes, “the China Order has a record of suboptimal performance that features despotic governance, long stagnation of economy, suffocation of science and technology, retardation of spiritual pursuits, irrational allocation of resources, great depreciation of human dignity and life, low and declining living standards for the masses, and mass death and destruction periodically and frequently.”

That may sound harsh, but Mao’s Great Leap Forward and Great Proletarian Cultural Revolution, among other ill-conceived campaigns, resulted in the deaths of tens of millions of Chinese. As Xi forces China back to a Maoist-inspired model, China could experience disasters that now seem inconceivable.

In any event, the people of Hong Kong are starting to show the failings of Xi’s model. There would be no protests in China’s “special administrative region” if he had not tried to exert control before the end of the 50 years of promised “high degree of autonomy.”  His ambition this year to impose a draconian extradition law on the territory sparked wide scale resistance: an unexpectedly large protest in April and 17 weeks of continuous disruptions beginning in early June.

Now, Beijing looks helpless to quell unrest. It has lost hearts and minds of perhaps three-quarters of the population, who increasingly believe they are not “Chinese.” Force won’t work: even the open introduction of the People’s Liberation Army or People’s Armed Police will almost certainly trigger endless street fighting and cause high Chinese casualties. Younger protestors, dressed in black and decked out in riot gear, have held off a far larger police force while keeping support in the broader community despite rough tactics.

Demonstrators have the fervor of the communists seven decades ago, which means China could have a hard time holding onto the rebellious territory. Younger HongKongers now have their own anthem—“Glory to Hong Kong”—and a protest flag. Their slogans, like “Liberate Hong Kong,” assume independence.

The uprising in Hong Kong is a warning to Xi. Chinese regimes, pretending to rule tianxia, have come apart as peripheral areas revolted and inspired rebellion closer to the seat of power.

Yu Ying-shih, the famed China historian, once told me the Soviet Union lasted 70 years, “the life span of the revolutionary generation.” Minxin Pei of Claremont McKenna College notes Mexico’s Institutional Revolutionary Party remained in power 71 years and the Nationalist Party held on for 73 years in Taiwan.

Seven decades after the founding of the People’s Republic, the communist project in China is in jeopardy. New China is beginning to look very old.