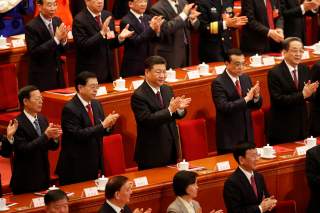 “This geopolitical recession is something really simple—it’s the end of the U.S.-led global order,” Ian Bremmer, head of risk advisors Eurasia Group, told the ANZ Finance & Treasury Forum in Singapore this week.

Bremmer’s message plays well, and not just to those attending financial conferences. Most American policymakers, for instance, have bought into his “declinist” predictions about China’s rise and America’s fall. At least two—and maybe all three—of President Donald Trump’s immediate predecessors accepted the premise of eventual Chinese dominance.

For a long time, those predictions were generally accepted. Most recently, however, there are even more reasons to challenge the assumptions underpinning the narrative of declinism.

Declinists make one fundamentally incorrect assessment. “So that is one big reason why we have entered a geopolitical recession,” Bremmer told the crowd in Singapore. “All of the major international underpinnings of the U.S.-led order have become unmoored over the last 25 years.”

The most important reason for the establishment of the U.S.-led order after the Second World War was the dominance of the American economy, and the most important justification for declinist views has been China’s stunning four-decade economic revitalization. There is no shortage of predictions when in dollar-denominated terms China’s gross domestic product will overtake that of the U.S.

And that gap is, in reality, widening. Beijing’s official National Bureau of Statistics reported 6.8 percent growth for the first half of the year, far in excess of the American rate.

Yet China’s number is surely exaggerated. Beijing claimed nearly identical 6.7 percent growth for 2016. The World Bank, however, has cast doubt on that figure by releasing a chart in the middle of last year.

So what was China’s gross domestic product increase in 2016 according to the World Bank? Answer: 1.1 percent.

America’s economy, thanks to Trump’s deep cuts in taxes and regulations, is powering ahead. In the first two calendar quarters of this year, the economy grew 2.2 percent and 4.2 percent. The Atlanta Fed’s GDPNow forecast for the just-completed third quarter is 4.2 percent.

China’s economy is beset by excessive debt accumulation and other maladies, but the main factor inhibiting economic potential is not a systemic debt crisis—a concern to be sure—but the abandonment of reformist policies. Xi Jinping, the Chinese ruler, has turned his back on Deng Xiaoping’s “reform and opening up” program that is credited with sparking Chinese growth for almost four decades. Instead, Xi for a half decade has been reinstituting the Stalinist state model that Mao Zedong embraced in the early 1950s.

Xi’s reversal of liberal economic policies has been matched by his reversal of political and social policies. He has de-institutionalized the Communist Party, thereby heightening the risk of political instability. At the same time, he has demanded conformity—“absolute loyalty”—and tightened social controls. The institution of a nationwide social credit system, which will assign a score to every resident for all his or her actions, is but one example of the state’s attempt at total control of society.

China, as a result, is moving from authoritarianism back to totalitarianism, readopting a model that brought the People’s Republic to the brink of economic failure twice, once during the Great Leap Forward of the late 1950s and early 1960s and again during the Great Proletarian Cultural Revolution of the mid-1960s to mid-1970s. China’s economy cannot be expected to do well in an increasingly intolerant political atmosphere, as the country’s own history suggests.

And there is one more reason to doubt Chinese economic dominance: demography. China will soon join the ranks of shrinking nations. The population will peak somewhere around 1.44 billion people at the end of next decade according to the U.N.’s World Population Prospects: The 2017 Revision. By the end of the century, China will have a population of 1.02 billion.

China’s decline has implications for its competition with the U.S. In 2015, China’s population was 4.4 times larger than America’s. By 2100, China is projected to have a population only 2.3 times larger.

China’s projected decline—and we should remember the U.N.’s estimates seem to overstate that country’s demographic potential—does not mean the Chinese economy cannot succeed, but it does mean it will have to succeed in spite of demography. China’s four-decade burst of growth occurred during the reaping of the “demographic dividend,” an extraordinary increase in the size of its workforce.

China’s workforce, by the way, is already shrinking, first peaking in 2011 according to the official National Bureau of Statistics.

China has yet to show it can break through the dreaded “middle-income trap,” and if it does not, the country’s economy will not overtake America’s. If China’s economy does not overtake America’s, Beijing is unlikely to dominate the global system that is supposedly crumbling. Without a vibrant economy, China will not be able to modernize and build up its military, it will not be able to ensnare developing nations with its debt-trap diplomacy, and it’s One Belt, One Road initiative will go unfunded.

Bremmer in Singapore made the argument, as the CNBC headline told us, that “A ‘Geopolitical Recession’ Has Arrived and the U.S.-Led World Order Is Ending.” During a week when U.S. equity indexes are plunging, his conclusion looks prescient.

Yet by even that measure, the U.S. still looks strong. Despite this week's carnage, the Dow Jones Industrial Average is up 1.4 percent this year, and the broader S&P 500 has gained 2.1 percent. Nasdaq has increased 6.2 percent.

Chinese indexes are going the other way, among the world’s worst performers this year. The Shanghai Composite is down 21.9 percent, and the Shenzhen Composite is off 31.9 percent. The tech-heavy ChiNext has dropped 28.0 percent. Chinese stocks would be far lower had Beijing’s so-called “National Team” not been buying shares like crazy in a centrally directed effort to avert meltdowns.

More tellingly, the onshore renminbi is down 5.91 percent this year against the greenback. It would be far lower than the current 6.89 yuan to the dollar if it were not for persistent state intervention.

So is Bremmer correct that the U.S. is in decline and the international system it leads is passing away? The Chinese people don’t seem to think so. Survey after survey show almost half the country’s wealthy have plans to leave China permanently.

And they are taking money with them. Money gushed out China in 2015 and 2016—about $2.1 trillion of net capital outflow those two years. The hemorrhaging would have continued but for the draconian clampdown in late 2016, with many of Beijing’s controls, banana republic-style, unannounced.

Many of the people and much of the money have ended up in the United States, as walks through most American cities—and my suburban neighborhood—suggest.

So the main underpinning of the American-led order, the American economy, is doing just fine. And the economy of the main challenger to that order is not doing well at all.