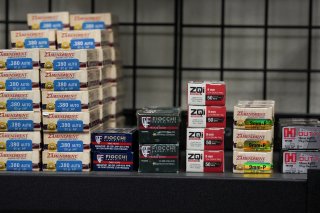 There have been many stories told in recent months about the continuing ammunition shortage, but more of them than anywhere else have come from places where hunting is particularly popular, such as Wisconsin.

Seehafer News, a publication in that state that’s based in Manitowoc County, tackled the topic this week. The outlet spoke with Bruce Elliott, the owner of a business called  Louie’s Sporting Goods.

“We can’t get the ammo, we can’t give it to our customers, our customers are getting upset over it, we are upset, we just can’t get ammo. If I could have a semi load of ammo out in the parking lot right now, I guarantee that I would have people coming from all over the state coming in to buy it,” Elliott told Seehafer News.

“I tell the guys, if there is some ammo out there and you find it, you better grab it,” the store owner added, in reference to calls he’s been getting from around the state, from people looking for ammo. “If it’s not the brand you use or what it is, just take it and make do for now.”

Elliott also told the publication about his frustration with the continuing shortage.

“A lot of this ammo is made in the country,” the owner said. “The CEOs and Presidents have been on the news saying ‘We are up and running. We are running 24/7.’ Where is it all? No one has any answers.”

The ammunition shortage has been attributed to a variety of factors. There were supply chain disruptions in the early days of the pandemic that have continued to this day, and when Remington, a major ammo manufacturer, declared bankruptcy in 2020, that knocked their manufacturing capacity offline for months.

Meanwhile, demand has skyrocketed, as millions of Americans bought guns throughout 2020. Some took up hunting during periods of pandemic boredom, while others responded to social unrest by arming themselves. More recently, the State Department has placed sanctions on Russian-made ammunition, which threatens to further curtail supply. Russia was the leading exporter of foreign-made ammunition in 2020.

“There’s nothing that we can do. We try to get as much in as we can obviously to sell it, but it’s the distributors that have a short supply and manufacturers do too,” Scott Virlee, owner of Virlee GunWorks, told WBAY in an earlier report about the shortage in Wisconsin.