The Great Game: Why Xi Sees an Opportunity in Central Asia 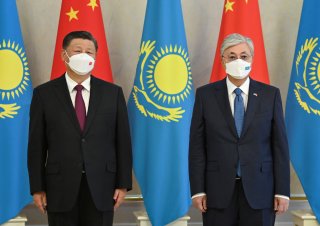 The 20th National Congress did not go according to plan for Chinese leader Xi Jinping. The unexpected public ouster of former president Hu Jintao indicated the possibility of an intra-elite struggle among the top members of the Chinese Communist Party (CCP).

Premier Li Keqiang was known to be in agreement with Xi about the state’s long-term goals, namely, to build a moderately prosperous society (Xiaokang) by 2021 and turn China into a great modern socialist country by the 100th anniversary of the People’s Republic of China (PRC). However, their opinions did not coincide in the implementation of the main contours of economic policy. For example, Li disagreed with Xi regarding the “zero-COVID” policy as well as immense investments in the Belt and Road Initiative (BRI).

China’s zero-Covid policies led to an economic slowdown and stirred up discontent among the masses. From 2014 to 2019, China invested $90 billion dollars in BRI countries. But given that low-income developing countries make up a significant share of BRI participants—more than 46 percent of the total number of participating countries—many of them are in debt to China. Moreover, due to Covid-19, almost all BRI countries experienced negative gross domestic product(GDP) growth and decreased their solvency, which doubled these countries’ debts to China. Of the sixty-eight BRI participants, twenty-three are at risk of defaulting on their obligations with Djibouti, Laos, Maldives, Mongolia, Montenegro, Pakistan, Tajikistan, and Kyrgyzstan at a particularly high risk of doing so.

Based on the composition of the Politburo Standing Committee, many experts noted that the new members are personally loyal to Xi, signaling his complete consolidation of power. This provides Xi with ample decision-making leeway concerning China’s future. As Alibaba founder Jack Ma said, “China is like a huge ship. In order to drastically shift its course, even if there is such a need, it takes considerable time and effort”.

It is often assumed that China’s policy towards Central Asia will not change much. However, taking into account the current economic crisis and structural changes within the international order, adjustments will likely be made by strengthening the BRI. The retention of Wang Huning, the chief ideologue of the CCP, as a Politburo member is a clear signal that Xi will intensify the promotion of the BRI in his third term. Considering that Central Asia is critical to BRI’s success, the project will be a determining factor in China’s policy in the region. Additionally, because the BRI was first unveiled ten years ago in Kazakhstan, there is a symbolic meaning for China to show the project’s achievements in Central Asia.

Until today, China has been careful not to push the BRI too strongly in the region. Beijing understands the difficulty of predicting Russia’s role in the region and, most importantly, the new trends in relations between the Central Asian countries and China itself. But this only testifies to Beijing’s intentions to gain a firm foothold in the region and supplants Moscow’s influence.

First, given the weakening of Russia’s role in Central Asia due to its ongoing war in Ukraine, China’s position in the region is strengthening. Thus, American experts believe that for many of Russia’s neighbors, the war in Ukraine has accelerated the process of breaking out of Moscow’s orbit. Currently, many Central Asian states are rethinking and revising their relations with Russia. Sharp speeches by Kazakh president Kassym-Jomart Tokayev at the St. Petersburg Economic Forum in June and Tajik president Emomali Rakhmon at the October Commonwealth of Independent States (CIS) summit addressed to Russia, as well as the evident desire of the countries of the region to resolve sensitive territorial issues bilaterally, vividly illustrates Central Asian states’ transition to independence.

Russia’s growing isolation provides China with an opportunity to challenge its influence in Central Asia. Moscow’s strategic dependency on Beijing amidst the war in Ukraine excludes the possibility of Russian retaliation for encroachment into its historic sphere of influence.

Second, in just this year, Xi met face-to-face three times and virtually once with other Central Asian leaders, indicating a new wave of high-intensity diplomacy. These meetings summarized thirty years of bilateral and multilateral relations while outlining prospects for future cooperation.

Thus, at the Virtual Summit of the leaders of Central Asia and the President of China in January 2022, Xi made a number of important proposals including increasing trade to $70 billion by 2030, deepening cooperation in the field of advanced technologies, and providing 1,200 government-sponsored scholarships.

Xi’s decision to make his first trip abroad since the outbreak of the pandemic to Central Asia is a fundamental strategic step to send an important signal to China’s competitors and partners in the region. Before the visit, the Chinese president published articles in which he outlined policy contours and guidelines for a new stage in the development of Central Asian-Chinese relations for the next decade.

An analysis of Xi’s September visits to Kazakhstan and Uzbekistan testify to China’s interests in the region. A number of documents signed with Uzbekistan and Kazakhstan expressed China’s strong political commitment to the region, with a new focus on cooperation between Chinese media regulators and their counterparts in Kazakhstan and Uzbekistan. Earlier, Chinese experts expressed indignation that a negative perception of China still persists in the region despite huge investment contributions for Central Asian economic development. This was primarily attributed to low awareness and the lack of positive information about China. Media interactions between each side to fill this gap will become the main tool for Chinese soft power projection in the region.

Third, Xi explicitly identified the BRI as an important mechanism to realize Chinese interests in Central Asia. At the Shanghai Cooperation Organisation (SCO) summit in Uzbekistan, Xi called for continuing efforts to complement BRI projects with national development strategies and regional cooperation initiatives, as well as to expand sub-multilateral and sub-regional cooperation.

The need for regional transportation and communications links is increasing in Central Asia. Beginning next year, Beijing will become actively involved in constructing critical transport infrastructure in the region. To this end, after more than twenty years, Uzbekistan, Kyrgyzstan, and China will revive the China-Kyrgyzstan-Uzbekistan (CKU) railway construction project. On the eve of the SCO summit, the relevant authorities of the three countries signed an agreement to implement this project with Chinese financing, no doubt placing it under “the framework of BRI.” This connectivity project aims to ensure Chinese access to Central Asian markets which is especially relevant when the war in Ukraine has impeded important routes leading to Europe.

China’s interest in the speedy implementation of the BRI is becoming a decisive factor in the implementation of the CKU railway. According to experts, the CKU railway will not only create the southern corridor of the Second Continental Transport Bridge but will also open up new markets for manufactured products from the three countries. This route will become one of the shortest for transporting Chinese goods to Europe and will also increase Beijing’s regional economic influence.

Finally, as a result of the Covid-19 pandemic, China will make more targeted investments rather than large-scale commitments. Xi’s visit to the region signals that China will invest more funds in the region but from now on, they will not be unconditional. China is determined to protect its economic interests in the region by linking them to certain political benchmarks. It is likely that initially, these conditions will be delicate but firmer demands for change will eventually be issued.

Due to the negative economic ramifications of the pandemic and the Russo-Ukrainian War, Central Asia has a general interest in accelerating the implementation of the BRI and other Chinese-financed projects. Still, while counting on large Chinese investments, participating countries should not hope for “generous conditions.” Countries can pay a high price for Chinese funding, including the “Sinicization” of their economies and cultures.

For Xi, the BRI will remain a top priority for regional engagement as China continues to be the main donor for developing countries. Some BRI countries, however, will learn from the experiences of Pakistan and Sri Lanka and become more cautious about accepting Chinese investments with political conditions. Thus, the BRI is gradually transforming from a regional infrastructure development plan into a security strategy for Central Asia.

Abbos Bobokhonov is a PhD student at the University of World Economy and Diplomacy, and Research Fellow at the Institute for Advanced International Studies. Previously, he was a Research Fellow at the Institute for Strategic and Regional Studies under the President of the Republic of Uzbekistan, where his main areas of expertise were China’s foreign policy and SCO. His research interests include contemporary Chinese foreign policy in Central Asia, China’s Soft Power policy, BRI and AIIB.