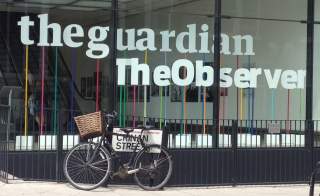 The Guardian announced Wednesday that the news outlet is banning fossil fuel company advertisements, even as the newspaper pushes back against activists who want it to nix automotive ads.

“Our decision is based on the decades-long efforts by many in that industry to prevent meaningful climate action by governments around the world,” the company’s interim CEO, Anna Bateson, and chief revenue officer, Hamish Nicklin, said in a statement. The Guardian will become the first major news outletto enact an all-out ban on such ads.

Bateson and Nicklin acknowledged that doing away with the ads could bring financial strain.

“The funding model for the Guardian – like most high-quality media companies – is going to remain precarious over the next few years,” they said in the statement. “It’s true that rejecting some adverts might make our lives a tiny bit tougher in the very short term.”

They added: “[W]e believe building a more purposeful organisation and remaining financially sustainable have to go hand in hand.” Advertising makes up nearly half of the British outlet’s revenue, The Guardian noted in a report announcing the move.

Readers are also pushing The Guardian to eliminate automotive advertisements as well, Bateson and Nicklin acknowledged before explaining why the outlet would continue to accept such ads.

“Stopping those ads would be a severe financial blow, and might force us to make significant cuts to Guardian and Observer journalism around the world,” they said, noting that the media industry is in crisis mode and needs as much ad revenue as possible to survive.

Greenpeace, one of the largest and most influential environmental groups in the world, is pushing news organizations to swear off such ads. The organization praised The Guardian’s move.

“This is a watershed moment, and the Guardian must be applauded for this bold move to end the legitimacy of fossil fuels,” Mel Evans, senior climate campaigner for Greenpeace UK, said in a statement to The Guardian.