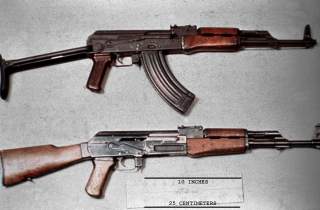 Ironically, the sanctions have proved so devastating because of a curious asymmetry: While Russia is one of the biggest weapons producers on the planet, with legendary designs such as the Kalashnikov rifle, Russia’s civilian market for small arms is dwarfed by America’s.

“Before the sanctions, about 80 percent of Russian products went to the markets of the United States and European countries that allowed civilian weapons,” a source in Russia’s arms industry told Russian news organization RBC (Google English translation here).

According to Russia’s gun licensing authorities, there are more than 4.5 million registered gun owners, who own more than seven million weapons. A 2018 study estimated that Americans own more than 393 million legal and illegal weapons, or nearly half of the 857 million civilian-owned weapons worldwide. In 2013, Russian newspaper Izvestia reported that several U.S. companies had signed contracts to import nine hundred million 7.62-millimeter cartridges.

Now, one Rostec director complains that the United States is buying such ammunition from China and Bulgaria. “Americans are cynical businessmen,” said Sergey Abramov. “They until recently bought our ammunition, because it is the cheapest. Now, taking into account the active U.S. policy of creating an unfavorable business environment for Russian enterprises, of course, they have closed their market. In addition, Russian lawmakers have blasted a 2017 U.S. Special Operations Command project that called for American manufacturers to copy Russian small arms and ammunition, which could then be provided to foreign armies and militias accustomed to using Russian and Soviet weapons.

The loss of the U.S. market has plunged the Russian small arms industry into crisis and led to calls for the industry to reorganize. No help will come from the Russian military, which already has sufficient stockpiles of ammunition. “The problem is that the cartridge factories were privatized long ago and each developed as part of their corporate plans,” said Abramov. “The industry is fragmented, it does not develop, the situation can be called a crisis. As a result, for the time being, domestic rifle ammunition is inferior in quality to NATO in some characteristics - and this is a question of our competitiveness.”

Kalashnikov, Russia’s largest producer of military and civilian small arms, has even proposed weakening Russian gun laws. The changes would increase the number of weapons that to civilian can own to ten guns. In addition, people with only three years of shooting experience—rather than the current five—would be allowed to own hunting rifles. Given the controversy in the United States about the maximum magazine capacity of civilian weapons, it’s noteworthy that Kalashnikov wants to expand the magazine capacity of hunting rifles so athletes can better prepare for shooting competitions.

Interestingly, Mikhail Degtyarev, editor of Kalashnikov Magazine, said there are still loopholes that allow Russian ammunition to be exported to America. “This is very good for us, because the volumes that the US market is capable of eating allow our producers of cartridges to grow and keep the price [low]."