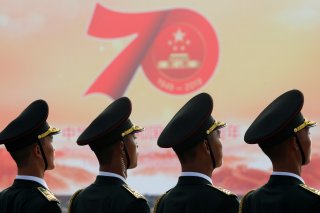 China’s nuclear forces have attracted increasing concern in Washington despite its vastly smaller size than those of the U.S. military. The People’s Liberation Army (PLA) was long estimated to dispose of nuclear warheads in the low hundreds, compared to the over 1,500 actively deployed nuclear weapons of the U.S. military, which has many more held in reserve).

The PLA’s smaller arsenal and its policy of stowing nuclear warheads separately from missiles arguably gave material credence to Beijing’s claims it has adhered to a No First Use policy in which it would use nuclear weapons only to retaliate against nuclear attacks.

However, 2021 satellite imagery and missile tests revealed that Beijing is undertaking a massive quantitative expansion of the PLA nuclear forces, following longer-running efforts to improve and diversify said forces.

Ballistic missiles in the PLA Rocket Force (formerly the Second Artillery Corps) have long been China’s primary provider of nuclear deterrence. But while the PLARF may deploy over 2,000 missiles, the Bulletin estimates it has only 280 nuclear-capable missiles, of which only 170 can reach U.S. soil (including Guam, Hawaii) and deliver 245 warheads, and 110 missiles which could reach the contiguous 48 states delivering 185 warheads.

Though China still fields liquid-fueled Dongfeng missiles, it has mostly transitioned to solid-fueled missiles which can be launched on much shorter notice. Until recently, China focused on mobile truck-launched systems like the DF-41 which would prove difficult to locate and preemptively destroy. But satellite images in 2021 revealing the construction of three hundred missile silos indicate China is re-investing in static missiles on a massive scale.

The PLARF has roughly forty operational missile brigades, split between six corps-level regional commands named Bases 61 through 66. A brigade may count as few as six or as many as forty-eight missiles depending on missile size/complexity.

China’s intercontinental-range ballistic missiles (ICBMs) have the reach to threaten targets in the continental United States.

For decades, that capability rested solely on silo-based, liquid-fueled DF-5 ICBMs which entered service in 1981. Currently, 20 DF-5A and DF-5Bs are deployed in central China in Bases 63 and 65 with ranges of 12,000 to 13,000 kilometers. A new DF-5C variant capable of carrying more MIRVs is in development.

In the 2010s these were joined by 36 DF-31A mobile ICBMs in three brigades with a range of 11,200-kilometer range (6,959 miles), adequate to strike the western half of the continental U.S. from central China according to the Bulletin of the Atomic Scientists. China is phasing in a new DF-31AG model with improved off-road mobility for greater concealability.

In a 2019 parade, China then debuted its huge DF-41 ICBMs, combining mobility, improved precision, and the range to comfortably strike the entire continental U.S. Rather than sticking to mobile DF-41s (sixteen or eighteen of which are operational in two brigades), the Defense Department report estimates China will focus on silo-based DF-41s to fill the hundreds of new silos under construction, as well as possibly a train-mounted DF-41 akin to Soviet rail-mobile nuclear missiles.

China’s current ICBMs can release at least three and in some cases as many as ten independently guided nuclear warheads, or MIRVs. However, given the small size of China’s stockpile and the need to maximize range, Chinese ICBMs are likely to carry much less than their maximum MIRV capacity.

In October 2021, China tested a prototype nuclear weapon similar to the long-retired Soviet FOBs system, but this time designed to release a hypersonic glide vehicle from space. While the weapon’s launch would still be detected, the potentially nuclear-armed glide vehicle could be released from anywhere in orbit, and its trajectory could prove difficult to track, making it ideal for outflanking existing U.S. missile defenses.

Chinese strategists have also suggested employing ICBMs with conventional warheads to serve as a strategic ‘warning shot’ of sorts.

China also maintains many regional-range missiles that can hit targets across Asia and the Pacific including in Australia, Guam, India, and Japan.

The most important are the PLARF’s two hundred DF-26 intermediate-range ballistic missiles (IRBMs) with a range of up to 4,000 kilometers (nearly 2,500 miles). The DF-26 is paricularly accurate due to its primary conventional strike role, which creates a risk that a conventional attack could be mistaken for a nuclear one. The Bulletin estimates “perhaps 20” DF-26s are dedicated to the nuclear mission.

The PLARF also has short and medium-range ballistic missiles like the DF-21 massed in coastal areas, particularly under Base 61 adjacent Taiwan. The nuclear DF-21A model is relatively precise and has a range of 2,100 kilometers (1,300 miles). The Bulletin claims the PLARF has forty nuclear-armed DF-21As and improved DF-21Es.

China’s DF-17 hypersonic weapon with a range 1,800-2,500 kilometers (1,100-1,550 miles) has officially been described as a conventional weapon, but the Defense Department report and some unofficial Chinese sources claim the DF-17 is dual-capable. The hypersonic glide vehicle released by a DF-17 would prove more maneuverable and difficult to track than a conventional ballistic missile.

Even shorter-range PLARF missiles could theoretically deliver nukes, but don’t appear to be assigned that role. The 600-900-kilometer range DF-15 missile was reportedly tested as a nuclear delivery system but is no longer described as such by Chinese and Defense Department sources.

Between 1965–1979, China dropped twelve nuclear gravity bombs from H-6 and Q-5 jets. However, this mode of delivery had low odds of surviving air defenses, and the PLA Air Force (PLAAF) largely abandoned the nuclear role by the turn of the century. Still, the Bulletin estimates China maintains up to twenty nuclear gravity bombs.

However, recently Beijing has reasserted a strategic nuclear role for the PLAAF. First, its H-6N “Badger” jet bomber (a new derivative of a 1950s-era Soviet jet bomber) could deliver nukes via two air-launched ballistic missiles (ALBMs) currently under development based on the DF-17 hypersonic and DF-21 ballistic missile.

Secondly, China is developing a subsonic flying wing stealth bomber called the H-20 which may be armed with shorter-range nuclear weapons.

Surface-skimming cruise missiles fired from trucks, ships or aircraft, are much slower than ballistic missiles but stealthier and more maneuverable. While U.S. intelligence occasionally claims China has nuclear-armed cruise missiles, evidence of operational capability has yet to materialize.

According to BAS, “China might have developed warhead designs for potential use in cruise missiles, it does not have any active nuclear cruise missiles in its stockpile.” However, a nuclear variant of the CJ-20 air-launched cruise missile (estimated range 1,242 miles) for mounting on the H-6K or H-20 bomber is deemed possible.

The PLA Navy operates six Type 094 nuclear-powered ballistic missile submarines (SSBNs), including two improved Type 094As launched in 2020. Based near Yulin on Hainan Island, these can carry twelve JL-2 submarine-launched ballistic missiles (SLBMs) with a range of 7,200 kilometers (4,400 miles). The Bulletin estimates the PLAN has seventy-two JL-2s. The PLAN’s older Type 092 and Type 032 SLBM-armed submarines solely have training and testing roles.

According to BAS, it’s unknown whether the Type 094s have deployed operationally with nuclear warheads on board, though several have suggestively embarked on patrols lasting up to three months.

China’s sea-based deterrence has significant limitations, however. The JL-2 missile can’t reach targets across the continental United States if launched close to China’s coastline. And the Type 094s are estimated to be “two orders of magnitude” noisier than U.S. or Russian SSBNs, meaning they may be easily detected and destroyed attempting to penetrate far enough into the Pacific to strike North American targets.

Therefore China is moving ahead with the production of a new presumably stealthier Type 096 SSBN armed with 10,000-kilometer (6,200-mile) range JL-3 missile which could be fired from “safe” waters near China and hit many U.S. cities—though not Washington, DC.  In February 2021, satellite images revealed the tail under construction of what’s believed to be the first Type 096.

Sébastien Roblin writes on the technical, historical, and political aspects of international security and conflict for publications including the National Interest, NBC News, Forbes.com, and War is Boring. He holds a Master’s degree from Georgetown University and served with the Peace Corps in China. You can follow his articles on Twitter.