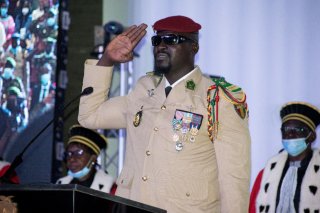 Mamady Doumbouya, a Guinean soldier who oversaw the country’s coup d’etat against incumbent leader Alpha Conde in early September, has been sworn in as Guinea’s interim president.

The swearing-in ceremony took place at the Mohamed V palace in Conakry, the country’s capital, according to Africa Guinee.

Doumbouya, a former fifteen-year veteran of the French Foreign Legion who served in Afghanistan, the Central African Republic, Cote d’Ivoire, and Djibouti, becomes Africa’s second-youngest leader, at age 41. The continent’s youngest leader, Assimi Goïta (aged 38) of Mali, also seized power in a coup in May 2021; the two men are reportedly friends.

The September 5 coup in Guinea has been widely condemned abroad and has led to the country’s increasing international isolation. Both the African Union (AU) and the Economic Community of West African States (ECOWAS) have suspended Guinea, and the AU has imposed sanctions, freezing its assets abroad. ECOWAS has demanded that Doumbouya release Conde, who was captured during the uprising, and return Guinea to democracy within six months. Conspicuously, no foreign leaders or dignitaries attended Doumbouya’s inauguration.

While Guinea’s ruling military junta has established a roadmap for returning the country to democratic rule, it did not provide a timeframe for doing so. The roadmap explicitly forbade anyone taking part in the country’s transitional government, including both civilian and military officials (and therefore Doumboya himself), from taking part in the next election cycle.

Doumbouya has defended his actions in interviews with the international press, arguing that the coup was necessary to dethrone Conde. The former leader, now aged 83, held office since 2010 when he became Guinea’s first popularly elected president.

However, Conde’s detractors have argued that he became increasingly dictatorial over time, and steadily removed limitations on his power. The most visible sign of this came in 2020 after he arranged for presidential term limits, enshrined in Guinea’s constitution, to be abolished, allowing him to run for a third five-year term. Protests in the wake of that decision led to the deaths of dozens of Guineans in Conakry. Although Conde won the next election handily, his opponents chalked the result up to voter fraud.

Doumbouya also cited extreme corruption and economic mismanagement as peripheral causes for the coup, arguing that these problems could be effectively resolved following a return to civilian rule.