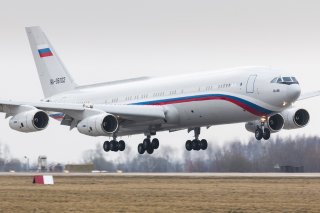 The Russian Air Force and Space Forces will receive two airborne command posts based on the Il-96-400M plane, according to a report by Russian state news publication RIA Novosti. These planes will replace the Russian government’s current Il-80, which itself is derived from the Soviet-era Il-86 passenger plane.

The new Doomsday planes will feature double the range of their predecessor. They will also boast a new radio communication system and other avionics updates.

Doomsday planes are aircraft used by civilian and military leaders to issue orders during a large-scale or otherwise catastrophic conflict in which land-based command infrastructure—for instance, the White House or the Kremlin—is deemed susceptible to a decapitating strike. This class of aircraft, which is currently only possessed by Russia and the United States, boasts protective features like electronic warfare countermeasures, as well as aerial refueling to stay in the air for protracted periods.

Despite the sensationalization around the term “Doomsday,” there is nothing particularly apocalyptic about the Russian procurement. Continuous improvements are made to flying command posts to maximize their survivability and to ensure an adequate degree of interlinkage between the plane and critical military assets. Indeed, this appears to be little more than a routine upgrade cycle to bring Moscow’s Soviet-era command planes to the same level of modernization as the rest of Russia’s rapidly changing air force.

Russian military expert Victor Murakhovsky shed further light on Russia’s need for an upgraded Doomsday plane. “First of all, we are talking about the development of communication of control tools,” he said in a follow-up interview with RIA. “New space navigation systems have emerged, for example, our GLONASS. Aside from this, there are new means of processing information. That is why it is necessary to build a new flying command post for this equipment.” GLONASS, or the “Global Navigation Satellite System,” is the Russian competitor to the U.S. Global Positioning System (GPS). These planes are, in part, designed to ensure a swift and secure line of communication between Russia’s top leadership and the country’s nuclear weapons systems, including nuclear ballistic missile submarines (SSBNs), strategic bombers, and land-based missile units. Citing a defense industry insider, the original RIA report added that the Kremlin is reviewing plans for a third modernized Doomsday plane.

Murakhovsky added that these aircraft are intended for the Russian President, Defense Minister, and Chief of the General Staff. The clearest U.S. analog to these Russian planes would be the Boeing E-4B Nightwatch, which is derived from the Boeing 747-200B and serves a similar function for the President, Defense Secretary, and Presidential successors.

Curiously, reports of the new Russian Doomsday planes came just hours after Pentagon press secretary John Kirby tweeted a clip of an E-4B being refueled in mid-air.  "An E-4B refuel mid-flight simply never gets old," Kirby’s tweet read. "My goodness, the skills it takes! Great flying by these aircrews. Thank you so much." Russian Doomsday planes last made global headlines in late 2020, when thieves reportedly broke into an Il-80 at an airfield in the southern region of Rostov and plundered more than one million rubles’ worth of electronic equipment.