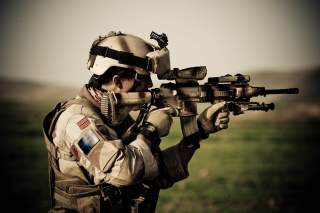 The HK416 is one of the world’s most popular infantry weapons of the latest generation. Special operation forces from the United States to Europe to Asia all use the HK416. It’s even issued to regular soldiers in the U.S. Marines, French Army and Norwegian Armed Forces.

The weapon has been around since the 2000s, but H&K hasn’t been sitting on its hands the entire time. The latest HK416A7 incorporates a wide range of ergonomic improvements that take could take the HK416 to the next level. But does the HK416A7 compare to modernized versions of the M4? Will it see wide use like earlier versions?

The original controls of the HK416 are identical to the M4 rifles it was based off of (the original name of the project was HK M4, after all). A fire selector that requires 90 degrees of rotation to go to semi-automatic, and 180 to go to full-automatic, a standard charging handle with a small latch that could only be activated from the left side, and a relatively swept back “rifle-angle” grip.

The trigger guard is of the flat type, going straight from the top of the vertical grip to the magazine well. The magazine well itself is nonstandard, with less slant than that of the M4 on which it was based. The first HK416s used a standard 6 position M4 stock.

Rounding out the package was a heavy free-floating quad picatinny rail and a standard H&K diopter drum sight mounted on the picatinny rail on top of the receiver. Departing from the M4 pattern, there is no front sight. The gas block is integrated under the free floating rail.

From the original HK416 design, a wide variety of variants emerged. One of the first things was a new stock with a convex buttpad and wider comb for better cheekweld. Also was a new integrated front sight, which was part of the gas block and could fold down. A more straight pistol grip with a small finger bump was also added.

In aggregate, these modifications were put on the majority of HK416s sold worldwide. Smaller variations within the type defined individual variants adopted by countries, usually per request of the adopting service.

The M27 IAR used by the U.S. Marines retains the front sight mounted on the rail and has a longer handguard. The HK416N uses the folding front sight/gas block module and a shorter rail. The most recent, the HK416F, has sights on the rail and a straight handguard without the finger bump. The barrel also has a custom profile on the standard length version, used to implement as gas ring to fire rifle grenades.

However the biggest update occurred with the HK416A5 in 2008, which incorporates many ergonomic improvements similar to those seen on customized civilian ARs. The traditional one-sided charging handle is replaced by a larger ambidextrous charging handle, allowing the rifle to be charged easily with a simple tug of the index finger on the right or left side.

The bolt catch is also made fully ambidextrous, eliminating the need to slap the rifle’s bolt catch on the left side upon completing an empty reload, and speeding things up. On the shorter versions of the HK416A5, there is a flip up iron sight integrated into the rail, eliminating the need for a separate one. H&K also ditched the old school diopter rear drum for a simple aperture flip up.

But H&K didn’t stop there. The most recent version, the HK416A7 incorporated a 45 degree selector that only requires 45 degrees of motion and 90 degrees for semi. As the HK416A7 was meant for a Bundeswehr contract to replace the G36 in the arms of the KSK and KSM special forces, reducing the selector switch throws to those similar on the G36 was a logical conclusion to reduce retraining time and simplify the manual of arms. Reduced-angle-selector throw switches are also popular among American civilians, who put them in their ARs for faster and more ergonomic actuation.

H&K also replaces the heavy quad rail with a new dual rail with H&K proprietary accessory mounted system that looks similar to Keymod. This is a questionable decision, since it requires the customer to buy proprietary H&K rails to add their accessories onto the side of the rifle.

Other companies already make M-LOK attachment system rails for the 416 platform. These M-LOK rails already are being used by the military. H&K even was directed by the US Army to produce a M-LOK rail for the HK417/G28 when it was adopted as the CSASS.

Despite its generally excellent reputation, the HK416 has one major problem. It weighs a ton. According to press releases the HK416A7 weighs 3.7 kilograms. This is heavier than most of the competition, which weight anywhere from 2.6 to 3.2 kilograms. The additional weight might fatigue soldiers faster during long patrols.

The recoil impulse of the HK416 and other short-stroke piston guns is considered to be slightly harsher than that of a properly tuned M4 Carbine. The latest versions of the M4 used by elite American forces feature a mid-length gas tube on the upper receiver. This makes these rifles very soft shooting, more so than the HK416. New Zealand’s latest infantry rifle also uses an identical configuration, a traditional direct-gas system in mid-length for minimal recoil.

In the end, while the HK416A7 in another “official” improvement on the HK416 platform, most of its improvements are not new at all, and rather based on similar modifications already present on the civilian market. All are small improvements to the rifle’s ergonomics, which while welcome, don’t address the main areas in which the HK416 is worse than some of its competition. Existing users of the HK416 are likely to simply buy the individual parts or similar parts that can be put into their existing rifles, rather than buying new HK416A7s from H&K.