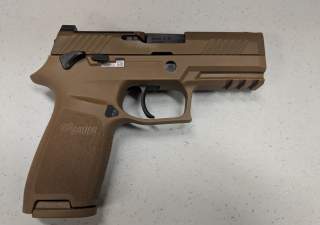 The SIG P320 chambered in .45 ACP was introduced in 2015, just a year after the first 9mm-chambered version came out. Like all other P320s that came before it, its frame can be swapped out to a smaller frame.

But as great as it is, there’s one thing the Glock 21 has going for it that the P320 doesn’t. We’ll talk about that in more detail in a bit.

Developed in 1990 with the first production models released in the middle of the following year, the Glock 21 is chambered for the .45 ACP and is one of the very few full-size pistols manufactured by Glock.

The Glock 21 is essentially a Glock 20 as far as weight and dimensions, the only differences being the caliber it is chambered for (.45 ACP for the former, 10mm for the latter) and that it uses that octagonal barrel rifling mentioned earlier.

I actually did a comparison between the Glock 21 and the Glock 21, you might want to take a look at it in this article. One thing I touched upon in great length when I compared those two was the option to convert either model to a different handgun caliber.

Unlike the SIG P320’s fully modular design, no Glock pistol’s trigger assembly can be removed for installation in another different size frame. If you bought a full-size Glock 21 and you want a subcompact pistol chambered in the same .45 ACP caliber, the only way you can have one is by buying a Glock 30 or a Glock 36.

But what’s so great about the Glock 21 — and all other Glock pistols for that matter (besides being the reliable handguns they are) — is the fact that you can convert one to a totally different caliber with just a barrel, recoil spring and extractor swap in a lot of cases. 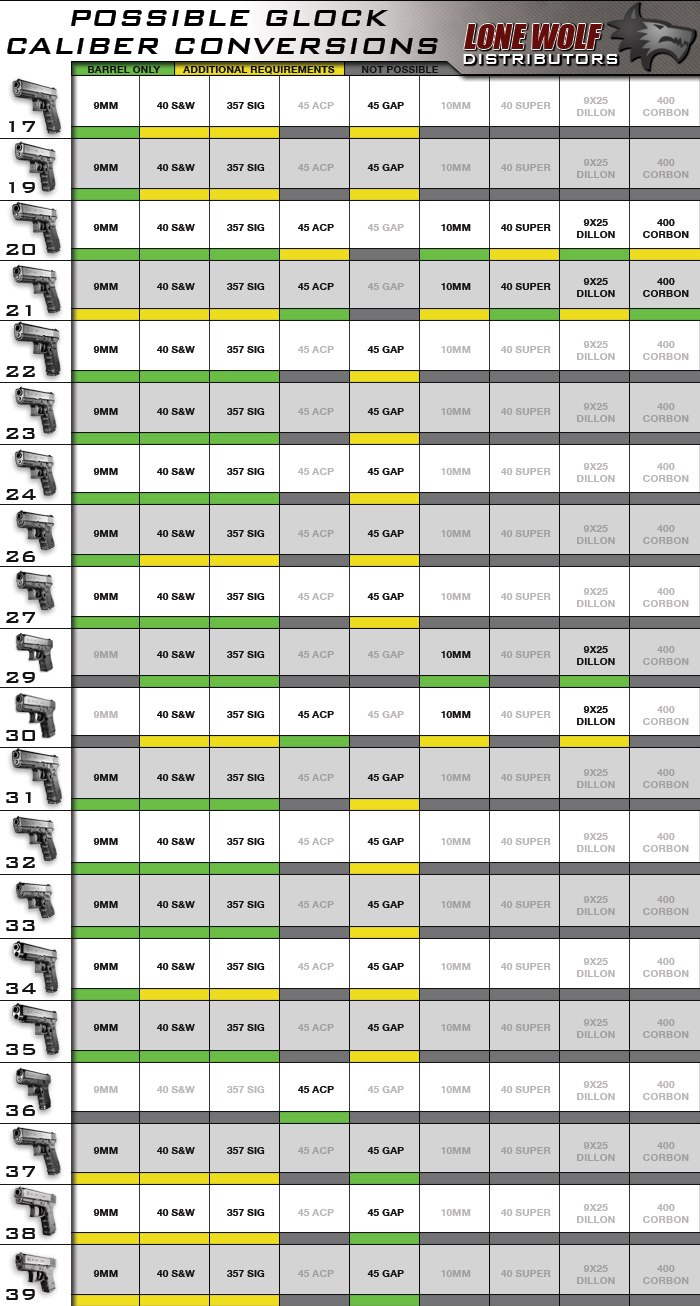 The same easy caliber conversion can be only done to SIG P320s chambered in either .357 SIG or .40 S&W (as either caliber uses the same slide and magazine, only a barrel swap is required to convert from one caliber to another).

The SIG P320 chambered in 9mm can be converted to .357 SIG or .40 S&W but it will require a different upper and a different magazine.

Sadly, the SIG P320 chambered in .45 ACP is one very lonely handgun in its caliber category. Firstly, there are no Caliber X-change kits currently available for the P320 in .45 ACP. SIG Sauer does plan to release them, but they’re not available at the moment.

Secondly, the SIG P320 in .45 ACP cannot be converted to any other calibers. Not that this is such a big deal, as most gun enthusiasts would tell you to just buy two different guns if you want to shoot two different calibers.

And don’t get me wrong, I think that advice does make sense (especially when factoring in the price of a new Caliber X-change kit from SIG). But still, for a handgun design that is supposed to be fully modular, this is where the SIG P320 in .45 ACP is outplayed by its Glock counterpart.

Now I’m aware of posts by people on a few different gun forums saying the P320 chambered in .45 ACP can be converted to any of the three smaller calibers (9mm, .357 SIG, .40 S&W). While they do sound knowledgeable enough to be believed, since SIG Sauer is keeping quiet about this, I would rather stay safe than risk a catastrophic failure and possibly lose a few fingers in the process.

The SIG P320 has good sights out of the box. These sights are made of metal and give a better sight picture compared to the Glock 21’s (and all other Glock pistols’) stock sights that are made of plastic and can easily break.

On sight radius, the full size P320’s sight radius measures 6.6 inches, while the Glock 21’s measures 6.77 inches, making the latter seventeen hundredths of an inch longer than that of the former.

As we discussed in one of these Handgun Showdown articles, a longer sight radius results in better accuracy. You can read more of it here.

What this means is the Glock 21 should be a tad bit more accurate than the full size P320.

The SIG P320 has front slide serrations out of the box while the Glock doesn’t. Depending on your preferences when it comes to racking the slide, the SIG P320 might be the better deal.

The SIG P320’s grip have contours on all its surfaces with palm swells on both sides of it, which allows for a more positive purchase on the grip without requiring the use of removable back straps of different sizes like those included with Glock Gen4 pistols.

In contrast, all Glock pistols feel blocky because none of them have palm swells baked into the grips. Even the Gen4 pistols with any of the backstraps installed feel blocky, and a lot of people I know complain about those finger grooves too.

This is a big subject and deserves an entirely different article just by its complexity, but bore axis describes the measurement of the distance (typically in inches) between the shooter’s grip and where the barrel and slide sits on top of it.

Ideally, the barrel and slide should sit as close to the shooter’s grip as possible, giving it a low bore axis. A low bore axis results in less muzzle flip which in turn results in better recoil management and faster and more accurate follow-up shots.

The Glock 21’s barrel height measure from the highest part of the grip to the center of the barrel is only 1.27 inches, which gives it a significantly lower bore axis compared to the SIG P320’s somewhat high bore axis of 1.78 inches. This is why a lot of SIG P320 owners complain about its muzzle flip.

SIG P320 owners also complain about the placement of these pistols’ slide catch/release lever being too far to the rear. I haven’t heard or read of any similar complaints from any Glock owner.

In the middle of last year, just a few months after winning the US Military’s MHS contract, news of the SIG P320 resulting in accidental discharges when dropped at a negative 30° from a certain height spread like wildfire all over the Internet.

There are several credible YouTubers who covered this issue, the first of which was a channel called Omaha Outdoors. It was determined that the weight of the SIG P320’s thick trigger (the metal piece itself — not the trigger pull measured in weight) is too heavy.

When the gun is dropped at a negative 30° angle, the inertia from the force of the drop results in the thick and heavy trigger of all civilian P320 pistols defeating the safety mechanism, causing the handgun to fire (it was noted by SIG in a press release that the military versions exhibited no such malfunctions when the USMC conducted their tests which SIG Sauer passed with flying colors).

SIG Sauer has since announced a Voluntary Upgrade Program (more like a recall which I think SIG refuses to label as such to avoid all possible class action lawsuits) to all SIG P320 owners.

Upon sending in their P320 back to the factory, a thinner and lighter trigger is installed along with other upgrades like a skeletonized striker, a new mechanical disconnector and a new sear. These upgrades should effectively eliminate any potential accidental discharge issues.

Though Glocks are known to have zero external safety features, news of this type aren’t as as sweeping as that of the P320’s.

In non-free states (e.g. California), it can be difficult, even impossible to purchase Gen4 Glock pistols being they are not on the Roster of Handguns Certified for Sale (i.e. they’re non-rostered).

What that means is Glock didn’t submit these pistols for approval to certain states because their guns don’t meet certain requirements legislated by such states. As such, local gun stores within such states do not have them in stock.

The same is not true for the SIG P320. They have certain SKUs that are state-compliant with non-free state laws. Just go to their website and scroll down toward the bottom of the page — they have a whole list of these state-compliant SKUs.

This entry should really be under state compliance but being such a large topic in and of itself, we won’t be covering non-free states’ restrictions on magazine round counts.