Gun Ownership on the Rise Among Women and Minorities 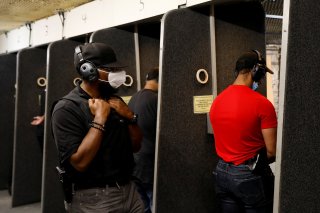 Many liberals like to tout how the United States of America is becoming more diverse, yet many of the same people would argue that supporters of the Second Amendment tend to be gray-haired white males. But gun sales are now surging among new demographics.

While there is no denying that the core gun buyers – those older white guys – continue to hit the gun shops and gun shows and dominate the range, minorities and women have become the second-largest group of new or first-time gun buyers. Firearm purchases by African Americans and Latinos increased significantly in 2020, and minorities continued to buy guns at a record pace in 2021 as well.

According to the latest data from Small Arms Analytics & Forecasting, some 18 million guns had been purchased by the end of November. Gun sales in 2021 outpaced every year except 2020, when 22.8 million guns were sold by the same point.

The National Shooting Sports Foundation (NSSF), a firearms industry lobby group, also reported that African-Americans have made up the largest segment of new buyers. According to NSSF data, ownership of firearms among Black Americans increased 58.2 percent through the first six months of 2020, and the numbers remained steady in 2021 – outpacing every other demographic.

The increase of inner city crime has certainly played a major role, however that is not to say legally purchased firearms are part of that increase in crime.

"The Second Amendment and gun rights have been the Black community’s right, and a lot of Black people are starting to realize it," Kourtney Redmond of the 761st Gun Club, a Black firearms education group based in the Chicago suburbs, told The Washington Times.

The group, which is named after the U.S. Army's 761st Tank Battalion – an all-Black unit that fought in the Second World War – reportedly expanded its membership by 30 percent in 2021, the largest increase it has seen since its founding. It is also a chapter of the National African American Gun Association (NAAGA), which was created in 2015.

There had already been a rise of NAAGA membership across the country following the election of President Donald Trump, but it increased further after the outbreak of the COVID-19 pandemic and the civil unrest that followed the police killing of George Floyd in May 2020. Membership in NAAGA grew by 25 percent in 2020, and by the end of that year it had more than 40,000 members nationwide.

"The police department and government isn't going to save the Black community, and a lot of Black people are realizing the first line of defense is yourself," added Redmond.

With the rise of ownership among minorities, it is no wonder that support for gun control has been on the decline.